Last day, Nasir, one of the members of the communitydropped an article titled “What is a Transformer?“. Today, he sent the second part of this tutorial: Construction of a transformer.

The transformer is quiet simple in construction. As told earlier, it consists of two magnetically linked windings, wound on two separate limbs of iron. It consists of the following basic parts: 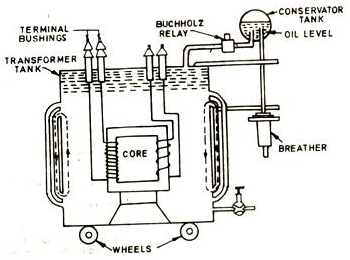 Usually the core of a transformer is constructed with a material having high permeability, such as silicon steel laminations, so that the core losses such as eddy current loss and hysteresis losses are reduced. Since the steel sheets have a very high resistivity, so the current losses are greatly reduced.

A transformer core can be constructed in two ways, depending upon the arrangement of the primary and secondary windings. These two ways are:

If the windings are wound around the core in such a way that they surround the core ring on its outer edges, then the construction is known as the closed core type construction of the transformer core. In this type, half of the winding is wrapped around each limb of the core, and is enclosed such that no magnetic flux losses can occur and the flux leakages can be minimized.

In shell type construction of the core, the windings pass through the inside of the core ring such that the core forms a shell outside the windings. This arrangement also prevents the flux leakages since both the windings are wrapped around the same center limb. 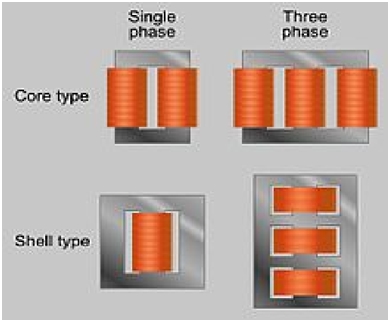 Windings of a transformer are made up of a conducting material to allow the magnetic flux to build up and hence the current can be passes from one winding to another. These windings are wound on two separate limbs of iron to increase the magnetic flux as iron is an efficient conductor and exhibits excellent magnetic properties. These coils are also insulated from each other. Since both these coils are wound on two separate limbs and due to the distance between them, flux leakages also occur which reduce our magnetic flux density and results in a reduced magnetic coupling between the two coil windings.

To avoid this situation, the distance between the two windings is reduced, so that the flux leakages can be minimized and a strong magnetic induction can be created and sustained between the two coils. But this arrangement also does not completely eliminate all the flux problems, since the magnetic losses are still present.

Other than these two main parts, Transformer tank and Conservatory tank are also used in transformer construction:

Since some type of container is also required to keep the transformer core and windings in and to safely insulate them, so a tank is used to keep the laminating oil, to minimize its deterioration and maintain oil levels. This tank also contains some other important arrangements like a number of important sensors and a gas detecting relay as well, which acts as a gas sensor and rings an alarm if detects the presence of some unwanted gas and immediately secures your external circuitry by disconnecting the transformer. 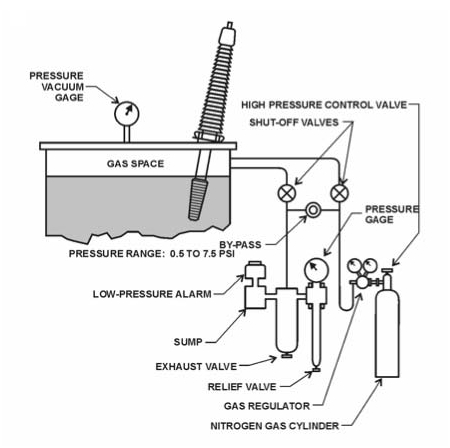 That’s all for today, in the coming post we will throw some light on the losses of transformer. In transformer as we have seen the primary and secondary coils are magnetically linked hence the conversion of electrical energy into magnetic energy causes few energy losses which we will discuss in detail in the coming lecture.