Here’s below an article from Nasir, one of the members of the community. If you want to submit an article as well, please send us a mail.

A Transformer is a device which transfers electric current from one circuit to another, usually by the principal of mutual induction. During this process, the frequency remains constant whereas the voltage can be increased or decreased according to the need. 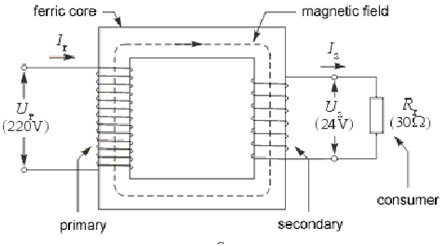 Working principle of a transformer

Transformer works on the Principle of Faraday’s Law of Mutual Induction. This principle states that the rate of change of flux is directly proportional to the induced electromagnetic flux.

Similarly, in a transformer, when an alternating current flows through one of the coil, it creates a magnetic field around it, which constantly produces a changing magnetic flux and so, when another coil is brought near it, some of the EMF is also induced in the secondary coil as well. Since the secondary coil forms a closed loop, the EMF produces the current in it as well.

So in short, this mutual induction between the coils is responsible for transferring the electric energy.

These windings are usually made on an iron core to make the magnetic field stronger, and laminated afterwards, so that the flux does not weaken due to air, which is a perfect insulator. But still some power losses are observed such as Eddy Current losses and Hysteresis loss.

Categorized on the basis of voltage build up, we primarily classify the transformers into two basic categories:

But two phase, 3 phase or higher phase transformers can also be built up, especially for commercial and industrial purposes, where the load is quiet large, three phases are mostly used. Connections of the transformer in a 3 phase are shown below:

As clear from the figure, a three phase transformer will have three primary coils and three secondary coils. The manner, in which the three windings are connected with each other, can be a delta connection or a Y connection. Both of these are shown below:

If the coils are connected in series, forming a closed loop, then the connection is known as a delta connection, but if the three windings are connected such that all have a common point then a Y-type connection is formed. It has a neutral wire at the common end point. Both of these connections are equivalent and are inter convertible from one form to another.

In the next part of this tutorial, we will have a look on the construction of transformer, which I think is very essential for an electrical engineer to know. I will explain the basics of transformer design like windings etc. and will check how to design a transformer.

So stay tuned and join our newsletter via email so that you get these amazing tutorials rite in your mailbox. Take care.