Indeed, for the first time, he saw the effect of bushfire and smoke on transmission lines’ faults/tripping. Read the whole story now!

A day in the life of an electrical engineer

It was another morning at work. Driver was a little late and I was imagining my boss’s awkward look. Phone rang and it was my boss telling me about a line which had tripped in our network. I disconnected the call and checked my mailbox realizing how un-affordable a tripped line in already load-shed area was. A 132 KV transmission line with a rated capacity of 80 MW had tripped and there was no redundancy plan (i.e. radial transmission line).

Every minute wasted was hundreds of rupees lost in the form of revenue. I called my assistant and instructed him to accompany the patrolling party. Fault was R-phase to ground 40 %. Transmission line length was 40 kilometers.

I had reached my office and was experiencing daily boring routine of shutdown plan arrangements and maintenance reports and I called the patrolling party for any updates. Locals had reported a blast sound at the locator identified location which happened to be along the highway to Baluchistan province.

Transmission line corridor was bushy and sandy area with harsh hot weather and temperature was above 40oC that day as far as I can remember. Line patrolling was completed and team reported no discrepancy. Locals’ report of a blast suggested a probable bird hit and it was recorded as bird-hit tripping in the record manual. Line was tried and put ON at 11 am PST.

Eating my usual roty-salan (a traditional dish in Pakistan) lunch in office canteen I had pushed past this minor tripping off my mind and the phone rang again. This time it was Load Dispatch Centre calling me directly being the line engineer. I was on guard as soon as I said “hello” because usually LDC does not call the line engineer directly.

On the other side of phone was my friend and ex-room mate who happened to be on duty that day and he astonished me by telling that the same line had tripped again with the same fault locator. Casually I finished my lunch and went to foreman office. Called the patrolling party and set them off to patrol the line once again. 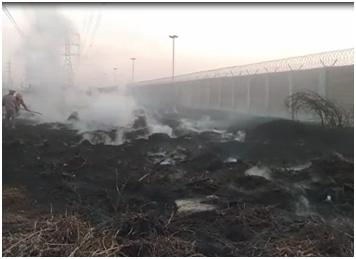 Smoke after extinguishing the fire

Patrolling was completed again and no discrepancy was observed except a self-extinguished bush fire under the same conductor span. Team and I had no idea why it tripped again. So it was recorded as a transient trip and we moved on with our daily routine.

My deputy manager (The boss) had called a meeting at 5 pm which I was informed about just two minutes before. He was pointing out our negligence in insulator-cleaning operations and blamed these tripping incidents on unclean insulators. Foreman who is an experienced guy in transmission field with a service of 25 years had something else on his mind. He shared his concerns that smoke interferes with transmission line in some way and maybe it was the bushfire which caused the tripping 2nd time.

His hypothesis although unusual and rare had its own charm i.e. it explained everything. DM brushed this idea off and insisted on increasing the insulator cleaning frequency. CLI (cleaning of line insulators) team had completed their cleaning activity just 15 days ago and despite their unsatisfactory performance records I was convinced that it was the smoke which caused it. But I could not fully understand how a fire and smoke can affect insulators function 80 meters above the ground.

Later that day, I googled the phenomenon and discovered a lot of bush-fire incidents cause transmission lines failure/tripping around the globe. China had suffered 81 transmission line tripping incidents due to bush fire in two years period. Situation is more prevalent in hot and dry climate.

How does smoke affect insulator-creepage value?

Recognizing it as a safety risk factor

Effects of smoke and hot gases resulted by a fire under transmission spans are a considerable risk factor for un-intended power flow in a transmission line under shutdown (under offline maintenance). This scenario can result in catastrophic consequences. Risk is not always limited to tripping or line failure, heat can also cause conductor melting and mechanical strength reduction in poles/towers and other structures. 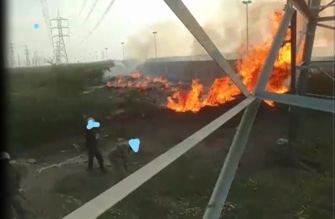 For further reading, I will also suggest reading this research paper at research-gate if you need to learn more about transmission lines behavior to smoke and fire under conductor spans:

Have you already seen this effect? What happened and what did you do? React below!