In this article, we will try to discuss the outlook of lightning protection inside the premises of an electrical substation… Enjoy and please comment below!

Lightning protection Introduction in context to part one

Lightning strikes are a natural phenomenon and high power surges regularly hit the vulnerable parts of earth’s crust. Electrical installations including the transmission lines and sub stations are quite vulnerable for lightning to strike due to the following reasons; 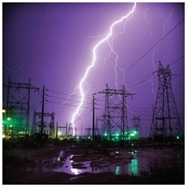 A substation gantry under lightning attack

Different protection schemes are part and parcel of any investment related to substations and high power transmission lines. Costly and vulnerable transmission lines are protected with the help of shielding wire (as discussed in the part one of the same post).

An electrical substations has both indoor (switchgear rooms) and outdoor electrical installations like gantry, TRAFOs and AIS (air insulated system) etc. When an electrical surge attacks from the above, following protection principle is the core concept of any lightning protection system.

Interception
Any incoming and unwanted surge originating from a lightening surge must be intercepted by a shielding system. This is usually accomplished by giving the lighting stroke an easier alternative.

Conduction
The intercepted surge is usually of very high voltage and harnesses a considerable amount of power. The protection system installed should have a capability to safely conduct it without being overheated or flashed. The conduction cables or conductors should be designed so as not to cause indirect lightning strokes on nearby electrical installations.

Dissipation
Last but not the least, dissipation is the most important factor when it comes to the lightning protection. Captured surge should be guided to and dissipated in the ground safely.

The basic rule of protecting an object from lightning strikes revolves around one universal fact about electricity i.e. it prefers to take the easiest available path to the ground (lower potential).

Lightning arrestors are installed where a power conductor enters the substation. It is designed to capture the surge and separate it from the normal flow of power. Lightening strokes are absorbed within the arrestor system and electronic components of the substation remain unharmed.

However, surge arresting system has its own advantages and shortcomings which must be considered before the commissioning of a substation.

A properly designed lightning protection system based on shielding and arresting principles is generally enough for the safety of a substation. However, complete identification of any hazards and proper evaluation of all possible risk factors remains the most important step in the selection of a particular system and brand.

Thanks for reading part 2,
Khuram.