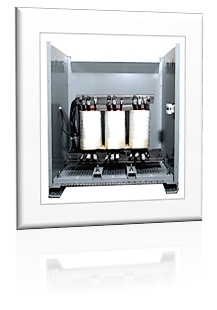 Most harmonic systems use transformers with K-Factor of 13. Transformers using K-Factor values are said to be K-rated. The purpose of K-rated transformers is to tackle the problems associated with inductive and nonlinear loads which include industrial loads such as motors. These types of loads are known as harmonic generating loads. Harmonics; are multiples of fundamental frequency which when increased beyond ordinary limits result in overheating of the system. Likewise, in a transformer harmonics produce excessive heat which could result in fire or in some extreme cases violent explosions. Most of these hazardous cases occur in non K-rated transformers which lack Harmonic Protection. Harmonics result in decreased life of any electrical system. In order to tackle overheating issues in conventional non K-rated transformers, K-rated transformers are designed in such a way to mitigate the effects of harmonics and to dissipate the heat from the transformer to the environment as quickly as possible. The image underneath delineates the effects of harmonics on a conventional sine wave.

Due to continuous increase of consumer end loads such as computers, Uninterrupted Power Supplies, Switch Mode Power Supplies, VFD’s and various small household motors the problem of harmonics has grown much severe. All of these loads are nonlinear and cause unnecessary loading of the Power System due to irregular demand of current and variable impedance during their voltage cycle. As a result these loads result in the generation of increased harmonic currents which at the end result in producing more heat in power distribution equipment which include distribution transformers.

This is where the importance of using K-factor transformers arises. K-Factor is a measure to determine how much a transformer could be overrated or de-rated to sustain a specified load.

There are some specific rules set by IEEE which must be followed before choosing a specific K-Factor value for a specific load. These include:

Did this introduction to K-Factor draw your interest? Please let us know by posting a comment.