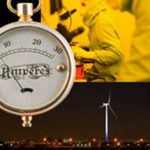 Global Positioning Systems can be used to provide a precise time reference for power system devices in an electrical network, ensuring time synchronization even across great distances.  A generic GPS system architecture is shown below: 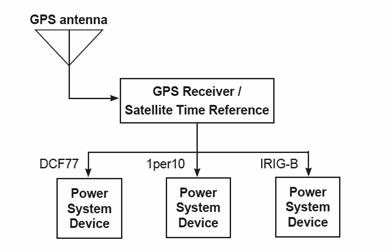 A GPS antenna receives a time signal from the system of satellites orbiting the Earth.  A GPS receiver accepts raw time data from the antenna and converts it to one or more time protocols.
Each power system device accepts a sync pulse, usually via a dedicated, high-speed digital input.  The device then sets its internal clock by decoding the supported time protocol.  Several time protocols are available, each with its advantages:

Network Time Protocol is a web protocol used to provide a time reference over an Ethernet network or even the Internet.  However, the accuracy that can be achieved with this approach is normally on the order of one second – not sufficient for the one-millisecond precision required in most critical power applications.

A relatively new standard for precision time synchronization is defined by the IEEE in standard IEEE-1588 (also known as “Precision Time Protocol” or PTP).  Using the IEEE-1588 protocol, devices can achieve sub-millisecond accuracy over an Ethernet network.  However, special Ethernet hardware is required, and the protocol is not yet widely available in electrical power devices.  In the future, it is likely to be implemented widely in power system, in conjunction with GPS technology.

see also this related discussion on the forum