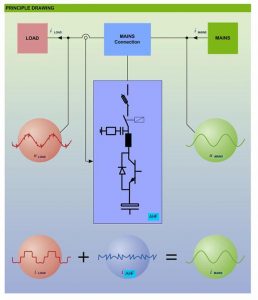 It is widely believed that active harmonics filters (AHF) are very costly and, therefore, are the last choice for power quality solutions.  The answer is it depends.  Every harmonics mitigation and power factor correction device has its place in the market.

Knowing what a solution does for power quality and the advantages and disadvantages of each solution provide optimized solutions with maximum benefits for the user.

Active harmonics filters provide controlled current injection to remove harmonic current from the source side of electrical system s and reactive current to correct for poor displacement power factor (PF).  Active harmonics filters can be applied to a single nonlinear load or many.  The nonlinear loads can be mixed types or devices, such as variable frequency drives (VFD), DC motor speed controls (aka DC drives), uninterruptible power supplies (UPS), or thyristor (DC) power supplies, to name a few.

When is the best value achieved with active harmonic filters?

The nature of harmonic currents is that they are vector sums of the amplitudes, current and voltage, at each harmonic order.  That is they are the root sum square of each harmonic order times the cosine of the phase angle differences between the vectors.  Vector math makes 1+1 = Sqrt 2 (1.414) not 2.   Active harmonic filter selection uses this to actually reduce the per amp size of the active filter as the quantity of nonlinear loads increases.  Individual solutions (that is per rectifier) must be sized for the full amplitude harmonic spectrum making them, collectively, more expensive and physically larger than AHF

6-pulse rectifiers produce the highest level of harmonic current among three phase loads.  If no impedance is present as an input line reactor or a DC bus choke (for diode rectifiers only), 6-p rectifiers may approach 100-120% total harmonic current distortion (TDD).  A first step to reduce this very high level of TDD is to insert 3-5 % impedance line reactance to reduce the TDD to about 32-40% per rectifier.  Then the AHF is selected for this much lower TDD level.  Thus the AHF size is reduced due to the inexpensive insertion of inductors.

Thyristor rectifiers are known as phase controlled rectifiers.  Thyristors are turned on at varying points in the AC waveform to control the power delivered to the DC side of the rectifier.  This process causes displacement PF variations and harmonics.  The interesting point is that maximum harmonics occur at best displacement PF and vice versa.  The AHF is the best device to provide exactly what is required to achieve best total or true PF – highest lagging PF and lowest TDD – all the time.  This achieves high levels of power quality.

Loads that cause flicker (light intensity variations due to rapid line voltage variations) are very short duration events – sometimes as short as 2-3 cycles.  AHF are fast enough to provide support in about 100 microseconds.  Often the AHF can be packaged with PF capacitor stages to create a hybrid VAR compensation (HVC) system for price and physical size optimization.

When applying harmonics standards inside a facility, the solution is sometimes difficult to attain.  This is usually due to the low short circuit current capacity of the point of common coupling chosen within the plant.  AHF make meeting or exceeding the standard simple, effective, and complete.

Does the above help you understand AHF and power quality?

What can we do to help you further?