The Flexible AC Transmission System (FACTS) is a technology that is designed to quickly supply the transmission network with capacitive or inductive reactive power so as to improve the quality and efficiency of power transmission systems.

Let your fellow electrical engineer A.N tell you about that! If you want to publish articles just like him, please send a mail to the team.

Why FACTS are required

The power consumption has changed over time, and today’s power sources and usage are different from what the power systems were originally designed for.

The transmission systems are required to supply complex loads in addition to being fed from different power sources that range from hydro, nuclear, geothermal, solar, wind and more. To accommodate the diverse and complex power sources and load patterns, the transmission systems should be flexible and able to react to any changes without affecting the power quantity and quality to the loads. 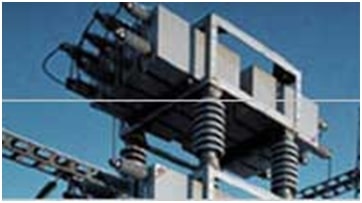 The FACTS devices are designed to dynamically control the parameters such as the voltage, phase angle and impedance of voltage transmission lines. The devices are usually connected in either series or parallel configurations.

This involves inserting the reactive power, such as a fixed series capacitor (FSC) or Thyristor-valve controlled systems (TCSC) into the transmission lines.

The fixed series capacitor (FSC) comprises of capacitor banks and is the most cost effective and simple type of series connection. It uses parallel arrestors such as Metal oxide varistors (MOVs) to provide protection, and a bypass switch and spark gaps for isolation.

This is a reactive power compensation that uses the Thyristor-controlled Series Capacitor (TCSC). The TCSC is made by adding a controlled reactor across the series capacitor. The reactor, which is controlled by the thyristor operates in parallel with the capacitor. This combination helps in providing variable as well as a continuous compensation system. 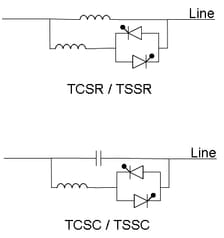 In the parallel compensation method, a switched or controlled system is connected parallel to the transmission lines, usually done at the power system node.

The MSCs are simple; however, there response is slow for effective network stabilization and voltage control. The capacitors increase the voltage at the point of connection, but have little effect on short circuit power.

The MSRs are the opposite of the MSCs and preferred for stabilizing the systems when the load is low.

A more advanced MSC is the MSCDN. This is basically an MSC with a damping circuit to prevent the system resonance.

The SVCs provides a fast and reliable method of controlling the voltage as well as the system nodes.

The method involves changing the reactive power which is achieved by either controlling or switching the capacitive or inductive reactive power components that are usually connected on the transformer secondary.

Advantages of using the FACTS

There are both technical and financial benefits:

Determining type and rating of a FACTS

The choice of the FACTS size and rating depends on the existing system condition, configuration and tasks to be performed.

This starts with a network study to identify the critical conditions of the grid and its connections. The analysis should look at the risk issues such as voltage collapse, power swings, undesired power flows, subssynchronous resonances, etc.

If there are no power quality issues such as when the grid is stable, it is also important to investigate if FACTS can be used to optimize the utilization of the lines such as increasing the transmission capacity.

After determining that there is an opportunity to improve the transmission system either by increasing the stability or transmission capacity, the appropriate type and rating of the FACTS device is selected.

Today’s power generation and consumption are always changing due to the different sources of power and diverse nature of load. These can lead to unstable power and unreliable power transmission.

The FACTs technology can reliably respond to the dynamic variations in the electric power arising from changes in load or amount and quality of power generated. This helps the electricity companies to improve the power quality, maximize the use of existing assets, increase flexibility and reliability of the systems.

Thank you for reading my material,
A.N.

Comment below if you have any question or remark to do to!