Traditionally, there are three major steps in the provision of consumers with electricity. They are generation, transmission, and distribution.

Today let’s talk about Decentralized generation as a system thanks to this article from Uko, graduate of mechanical engineering in Nigeria.

First of all, here’s a little reminder. Generation is the production of electricity from primary sources of energy. This is the first stage of electricity supply and it takes place in a remotely located plant.

Transmission is the second stage of conventional electricity supply. It is the bulk movement of electricity from generating stations to supply areas. Transmission may be underground or overhead. During the transmission of electricity, losses occur in power lines and transformers as a result of the Joule effect. These losses amount to 8-15% of the energy generated.

The final stage of electricity supply involves stepping down electricity from transmission systems and distributing it to consumers within an area. 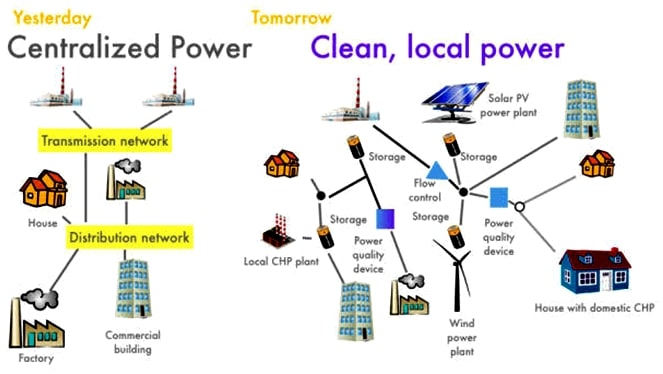 Decentralized generation for a Cleaner energy

Decentralized generation promotes the production of clean energy. This is because micro-plants typically employ renewable energy sources such as solar power, geothermal power, biogas, wind power, and small-scale hydro-power to produce electricity. A combination of more than one source of generation and an energy storage system is often used. This is called hybrid power generation.

The cost of installation and maintenance of transmission infrastructure is really high in centralised generation. Consider the kilometres of cable and power lines, the numerous step-up and step-down transformers and all other supporting infrastructure. These all contribute to high production costs.

Due to geographical location and topography, the supply of electricity to certain areas is nearly impossible. Locations such as Islands, deserts and mountainous areas are very difficult to connect to a national grid. In such locations, Decentralized generation makes power supply very convenient. Instead of transmitting power over rugged terrains and long distances, micro-stations can be constructed very close to consumers in hard to reach areas.

When several plants, as opposed to a single plant are supplying electricity, consumers have the option to switch between providers. This gives rise to competition among generation companies, thereby increasing their performance.

Currently, the traditional methods of power generation and supply are still widespread. However as more and more countries and investors seek to provide clean, efficient power; Decentralized power generation is advancing to the forefront as the future of power supply.

Thanks for reading me,