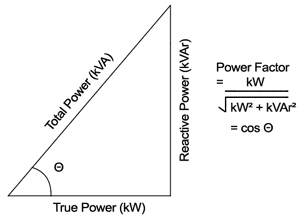 From the figure, it can be deduced that;

The power factor terminology also rises due to interrelation of active and reactive power components. As in active power, both the current and voltage are in phase with each other, hence power factor, which is the phasor angle between voltage and current phasor is zero. Thus power factor (cosine of angle zero) is one, so total power in such a circuit is completely utilized and is only possible for a pure resistive load.

But if the load is not purely resistive (i.e. it is either inductive or capacitive or both inductive and capacitive load along with some resistance), then such load will store part of electric power energy in the form of electric field in capacitor and some part of electric power energy in the form of magnetic field in the inductor. Hence this storage of energy and is swinging back and forth between source and load causes a time lag in the voltage and current phasors, thus rising to a non unity power factor load. Furthermore this power factor is categorized as leading and lagging due to capacitive load and inductive load respectively. It is shown in the following figure. 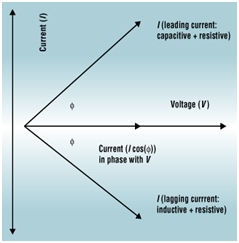 This was a basic explanation of Active Power. Did this help you?