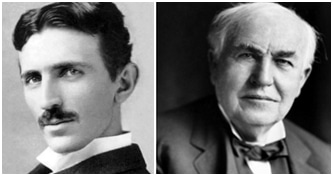 War of Currents?!! Does it mean something to you? This is the name of a battle took place between Nikola Tesla and Thomas Edison. We all know those great inventors, but let’s talk briefly about each of them.

Then I, Yasser one of the member of the Electrical Engineering Community Blog, will tell you why I’d place AC over DC. Please comment so that I can know more about what you think about it. 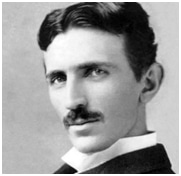 Nikola Tesla was born in 1856, was an engineer known for AC (alternating current) power system, which is still dominant till now and used all over the world.

He invented tesla coil which still being used in radio waves transmission, he also developed induction motor which ran onto AC current and he had around 300 patent of invention.

He worked for Thomas Edison for a while before they took different paths. 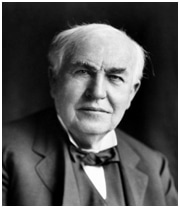 Thomas Edison was born in 1847; he went to school for short time and then his mother taught him at home.

He also developed the DC distribution system depending on DC current and from where the war of currents broke out.

But there was a main problem which is, DC generators were designed to produce electricity at low voltage (to make the generator smaller and cost effective) and at that time it was hard to convert low voltage to high voltage to achieve minimum losses in transmission conductors and in turns transmit electric power to longer distance.

Edison couldn’t solve such a problem and its system was efficient and viable up to 1 kilometer. Thus in such case the power plants (generators) will be very near to the consumers which is not environmentally acceptable.

On the other hand, Nikola realized the main problem and had its killing solution, the transformer which can convert low voltage to higher one so transmission can take place up to hundreds of kilometers till where consumption takes place.

So Nikola won the war and his system reveal all over the world till now.

It’s important to notice that most of our appliances runs on DC such as LED, TV, most of electronic devices and even home appliances motors can be DC.

Beside the great advancement in the field of Power Electronics which made it easier to have DC-DC Converters (DC transformer) thus the problem which faced Edison is solved now, we can raise the DC voltage up to thousands of volts then transmit it like the AC one.

Regarding DC voltage transmission systems, it requires only two wires not three as in AC, so the transmission cost is lower. Also with the increased investment in renewable energy especially solar and wind, it’s easier to tie these systems to DC grid rather than AC. The DC transmission system has lower losses than AC and also lower short circuit level so this will mainly reflect on the construction cost especially of protective devices (Circuit Breakers).

In the next decades we may notice many changes in the way electricity is transmitted. Maybe Edison DC system makes a comeback and reveal around the world.

Thanks for reading me,
Yasser.

Now let’s debate together. In 2018 why would you put AC over DC or DC over AC? Comment below!