The following figure illustrates the typical waveforms of line current and line voltage for a three-phase variable speed drive.
The line current is distorted as a result of the non linearity of the input rectifier. The voltage distortion is the result of the circulation of the distorted current through the line impedance.
In this example, the Total Harmonic Current Distortion THD i is equal to 40%, and the Total Harmonic Voltage Distortion THD u is equal to 4.3%. (See definitions below).

The power harmonics current spectrum, representing the amplitude of individual harmonic currents Ih (%) is shown on the figure below.

The current distortion can be reduced by implementation of power harmonics mitigation. As an example, the improvement provided by a 12-pulse arrangement is presented below. THD i is reduced from 40 to 11%. 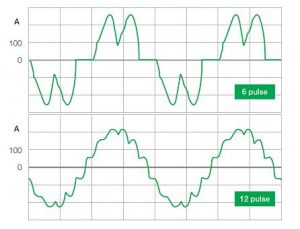 Q represents either current or voltage. H is generally equal to 40. Higher values (up to 50) are considered in some applications.
The current THD is commonly noted THD i and is equal to:

From this definition, we can obtain this very useful formula:

The voltage THD is commonly noted THDu and is equal to: