How Power Factor and Harmonics relate to Energy Efficiency?

In an AC distribution system, the maximum active power is transmitted to a load when voltage and current are undistorted and in phase. 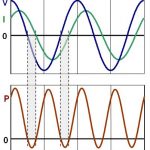 When voltage and current are phase-shifted as illustrated on figure 2, the instantaneous power P = V x I is negative during the intervals where the signal signs are opposite. The average power is then reduced compared to the situation where the signals are in phase. 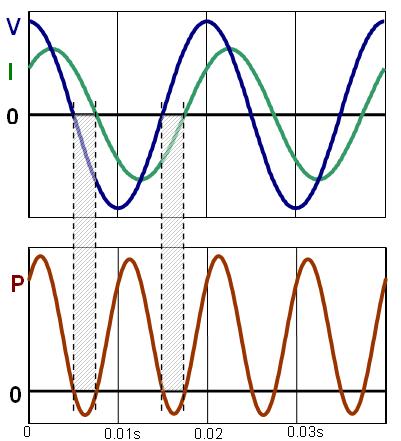 With a distorted current as illustrated on figure 3, the instantaneous power is negative or close to zero during a significant period of time. The average power is then reduced compared to the situation where the signals are undistorted. 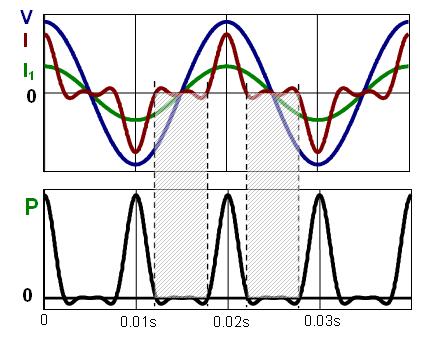 So, phase displacement and harmonics mean that the power transfer to the load is not maximized for a given value of r.m.s. current. In other words, the current circulating in the electrical circuits is higher than what is strictly necessary for transmitting the active power to the machines. This is the meaning of a low Power Factor.

For illustration, the diagrams of figure 4 present voltage and current wave forms for different situations, but with the same active power P transmitted to the load. With DPF = 0.7 or THDi = 100%, the r.m.s current is increased by more than 40% for the same active power. 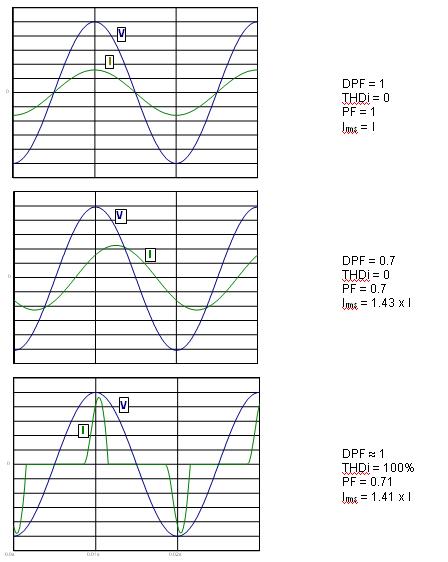 Another major consequence of power harmonics is the deterioration of the supply voltage quality. The circulation of harmonic currents through the system impedance creates voltage harmonics resulting in voltage distortion. This may impact the operation of sensitive equipment.

That is why Power Factor Correction (PFC) and a proper power harmonic mitigation will contribute to improve competitiveness of companies in different ways: