Our community still can count on A.N for year 2017! Here’s an article this electrical installations expert sent us lately inwhich he will tell you what’s the function and differences of switchboard and switchgear.

The switchboard and switchgear are two important systems that control how power is delivered to electrical circuits. The two terms are sometimes used interchangeably. However, it is important to note that they perform different functions and usually designed to work together in series so as to provide the maximum coordination and protection.

Since the two have different functions and capabilities, they are suited for different types of installations or at different stages of an electrical network. Whether to use switchgear, a switchboard, or both, depends largely on the design and requirements of the power system. To understand where each fits, we will have a look at their functions and differences.

The switchgear refers to the collection of the switching devices required for a low, medium or high voltage electrical circuit. It consists of switching and protection devices such as fuses, circuit breakers, isolators, disconnect switches, relays and other devices that control the flow of electricity.

These devices are used to switch the electric power on and off for transformers, motors, generators, transmission lines, and power networks in homes, commercial, industrial, transmission and distribution systems.

The switchgear permits the switching on and off of the generators, electrical equipment, transmission, distributors and other circuits during the normal operating conditions. However, under fault conditions, the switchgear is designed to detect the faults and interrupt the flow of electricity to the affected section, thus disconnecting and isolating it from the healthy circuit.

For efficient operation, the switchgear should be quick in operation and have an option of manual control to be used when the automatic feature is not working.
The switchgears are required at all switching points of an electrical network. The ratings of the devices at each stage depend on the voltage levels at that point. Other than in distribution and transmission networks, the switchgears are used in residential, commercial, industrial circuits.

The switchgears are classified according to the voltage levels involved in the circuit of application. The three classes are: 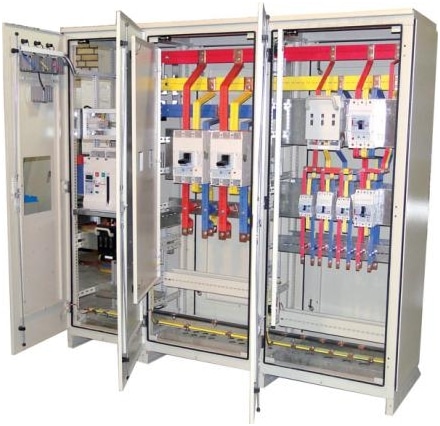 Due to the dangerous voltages and currents that the switchgear elements carry, the access must be restricted in one form or another based on the type of the facility. The switchgears are either outdoor or indoor. A fence with warning signs are used to restrict access to outdoor substations, while metal enclosures and cabinets are used in commercial and industrial buildings to prevent the technical as well as public from coming into contact with the live elements and parts.

The switchboard refers to a large single panel, assembly of panels, a structural frame or assembly of structural frames, on which buses, switches, and protective and other control devices may be mounted. The mounting may be done on the face, the back side, or both.

The electrical distribution equipment is designed to redirect and control the flow of electricity from one or multiple sources, to several different sections or loads. A switchboard can therefore be used to distribute power to individual loads, control equipment, transformers, panel boards etc.

The main role of the switchboard is to allow the incoming electric power to be divided into smaller independent circuits according to their current requirements. The circuit breakers as well as over current protection devices for each of the sections are selected according to the load current.

Once the currents are divided, they are then distributed according to the load i.e. lighting loads, sockets etc. Some switchboards such as those used in residential apartments have an option of metering to see the amount of power used by individual circuits. 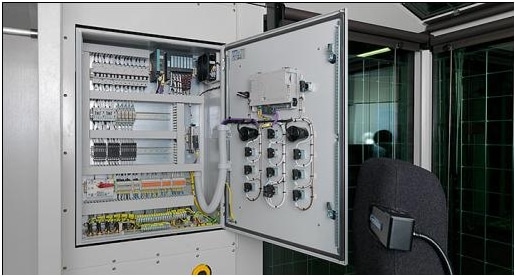 Major components of a Switchboard

Differences between switchgears and switchboards

The main difference is the voltage that they are designed to handle. The switchboards are generally for voltages less than 600 volts, while the switchgear systems are designed for higher voltages reaching up to 350 KV.

There are major differences in the hardware and design of the two systems. For example, due to the functions and high power handling capacity in switchgears, they use devices such as high power rated circuit breakers. Further, these circuit breakers as well as other devices can be replaced or withdrawn when the system is still operating.

The switchgear devices are mechanisms that enable the connection and disconnection of the electrical power to other circuits and loads. This comprises of devices such as fuses, the circuit breakers and relays.

The switchgears have robust constructions, are more flexible and reliable. However, they are more expensive than the switchboards.

Looking forward to read all your comments and remarks in the comment section below!