Today, in the 5th part of his tutorial, Nasir studies the working and advantages of an Open Transition Transfer switch. Let’s check what he has to teach!

Open transition transfer switches are designed to switch between the normally present power supply; which is being supplied to our homes by the power stations, and the backup arrangement in the form of some generator or anything.

They operate between these two supplies depending upon the conditions, if the primary power supply is available or not.

They have a switch which monitors the power sources and keeps a check so that whenever the primary source fails to deliver the power, it immediately switches to the backup set of generators.

But the major difference that it has from the closed transition transfer switch is that, this switching is not performed immediately, instead there is a short break between the opening of one contact and the closing of the other.

Working of an Open Transition Switch

The process somewhat occurs as follows: 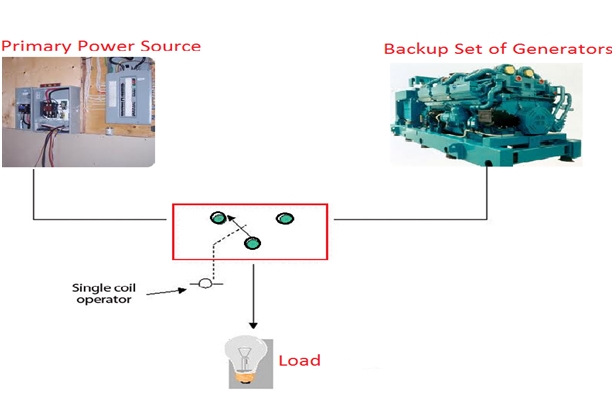 The switch that is monitoring both the power sources sets up a signal generator which has to be transferred ahead to the contacts.

When it senses a hindrance in the power output from the primary source, it sends the signal which then forces the contact to switch from the main power source to the backup power supply.

Due to this short delay in switching, this type of transfer switch is also known as a “Break before make” transfer switch. Since after it breaks its contact from one power source, it then makes the other contact. 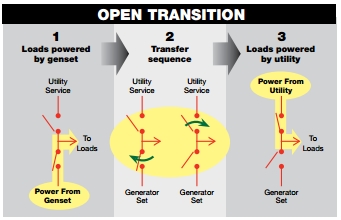 Now a days, Open Transition Transfer Switches are the most commonly used, espically in usual household applications and for small scale purposes where the load is not so much sensitive.

It is best suitable for small or inductive loads, which are not too much sensitive for power break ups.

Advantages of these Switches

These are one of the most popular among the transfer switches due to the several advantages they have:

The Reason that these switches cannot be used in sensitive electronic devices or for larger loads is that although there is no proper or fixed time delay, but still there is a short period of supply breakup in which the contact is shifting from the primary power supply to the backup one. This time period is approximately equal to five electronic cycles and is not good enough for sensitive loads.

But this transfer time can even be further minimized by adding a phase angle monitoring system so that any unexpected change in phase can be compensated immediately and prevent any problem in the system.

We have studied the working and advantages of an Open Transition Transfer switch. But there is also another remedy for eliminating their time delay, i.e. replacing them by a closed transition transfer switch.

So stay tuned to our tutorials to learn more about their working as well, and explore these transfer switches in detail in the next post.