Check the next part of Nasir’s tutorial on Control Systems. What do you know about Laplace Transform?

The transformation is only applied to general signals and not to sinusoidal signals. Also, it cannot handle steady state conditions. It enables us to study complicated control systems with integrators, differentiators and gains.

On basis of Laplace transformation we analyze LCCODE’s and circuits with several sources, inductors, resistors and capacitors.

For a given function f (t) such that t

From the above equation we conclude that the transformation converges when the limit exists and diverge when it does not. The L notation recognizes that integration always proceeds over t = 0 to t=1 and that the integral involves an integrator

dt instead of the usual dt.

Laplace transformation reduces the problem of solving a differential equation to an algebraic problem. Laplace theory is based on Lerch’s cancellation law which is given as follows:

In a differential equation, y(t) is an unknown variable depending on time.

The Laplace integral of a function g (t) is given as: 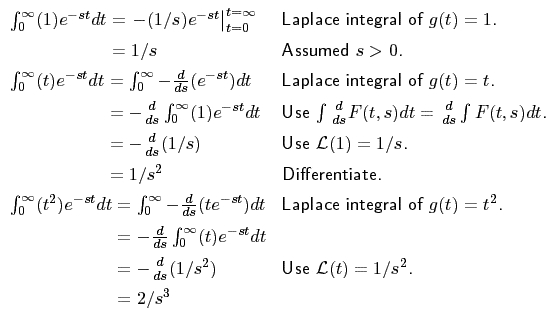 By summarizing we get:

Following are some properties of general calculus that can be implemented on the transformation:

At times the non-homogenous term in a linear differential equation is a periodic function. Any function f (t) can be said a t-periodic function if we write it as f (t+T) = f (t) like the period of sine and cosine is

radians where period of tangent is

For a t-period the function is written as:

Now the Laplace transform is given as:

Using the definition we have:

For improper integral to converge we need s > a. Here:

Let’s have a look at Laplace transform of Sin at and Cos at.

Using the Euler’s formula we can write:

By Laplace transform we have:

By comparing real and imaginary parts we get:

As we move on to the end of these tutorials we will study the most important part in the upcoming one that is Transfer Function. It is the factor on which a control systems depends so stay tuned to us for the tutorial.