Hi, it’s Steven Mill. I’m a fan of new technologies (electrical and electronics related), so today I’m going to talk about “Synaptic Transistors”. What is it?

There are more than 86 billion neurons in our brains that are connected by synapses. They not only complete countless necessary circuits but also keep adjusting to different stimuli continuously. In this process, the strength of these connections varies continuously. This process is the key mechanism of the learning process in humans. It facilitates fast and efficient calculations and computation processes.

Following this mechanism of brain processing, scientists from Harvard School of Engineering and Applied Sciences (SEAS) have created a new transistor. This transistor works on the principle of synapses behavior. This transistor keeps adapting to the changes in signals, detects and makes changes in processing accordingly. It transforms the flow of information continuously in the circuit. Utilizing this natural mechanism in latest technology can provide basis for a new line of novel artificial intelligence. 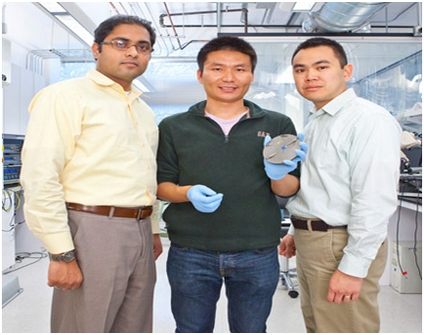 Now-a-days, scientists are interested in developing prototype technologies, involving the use of electron flow that are more energy efficient than any device known to man. Previously there had been focus on increasing the speed of electrons to achieve greater output energy. But, a major drawback is that a large amount of energy gets wasted.

Contrary to this, if electrons are made more powerful and pervasive then it can greatly increase the output and reduce the energy losses. 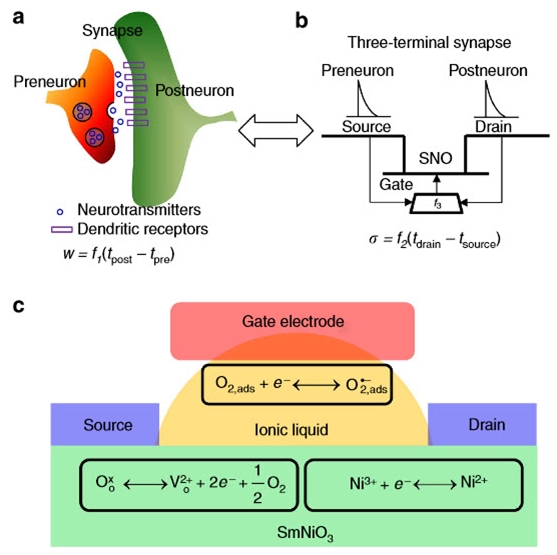 A genuine solution was to develop synaptic transistors. Scientists from SEAS claim that this transistor is a clone to the synapse system of a human brain. Every time when a neuron receives a signal and starts action, other neuron also reacts. The synapse between the neurons increases the connection’s strength. The strength of connection depends on how fast one neuron pricks the signal from other neurons. It requires remembering these actions between neurons.

The transistor is structured with two platinum electrodes. Packed between them is nickelate semiconductor, adjoining to which is a small pocket filled with ionic liquid.

Oxygen ions in this artificial version act just as the calcium ions and receptors that effect a change in human nervous system’s synapse. On receiving voltage supply these ions scatter out of the semiconductor. The nickelate semiconductor acts as the synapse centre of the transistor between the two electrodes.

The conductance of semiconductor is its ability to transfer information on electric current. Its conductance varies with the rise or decrease in concentration of ions. Time delay in electrical signal strengthens the connection.

A circuit multiplexer is externally connected to the transistor. It alters the time delay into voltage magnitude. This voltage when applied to the ionic liquid creates an electric field to control electronic transfer. The apparatus is implanted in a silicon chip.

A system with millions of these synaptic transistors can take to a new age of ultra-efficient high performance technology. 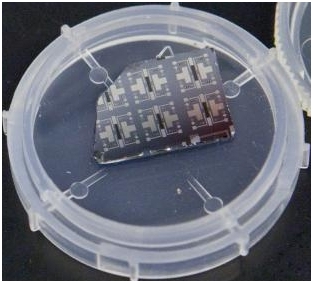 Advantages and Disadvantages of Synaptic Transistors

This transistor has exceeded silicon transistors due to various reasons. The device continuously changes its conductance with change in composition of materials. It also has non-volatile memory which helps the device to remember its state even if the voltage is interrupted.

The nickelate is from correlated electron system that has the ability of insulator-metal transition. On exposure to some external field, on certain temperature level, nickelet undergoes sudden changes in conduction. This sensitivity of the material is used to produce high amount of energy from small input.

The system can be integrated with the silicon based system to achieve high level output. Another advantage is that the learning behavior of this device is not sensitive to temperature. Thus it can be activated and controlled at any temperature.

The limitations of the system lie in the size of device that can affect its speed. To increase its speed there is a need to incarcerate the liquid and place the electrode near to it.

The research team is planning to search new possibilities, in collaboration with micro-fluidics experts, to eliminate these limitations. They are exploring capabilities of different oxides and their possible applications.

If this new material is synthesized, a new system with various unexplored properties will be created.

There is still a lot to do before this system is created. Researches have to work on this opportunity to develop knowledge from scratch. These experimental demonstrations take it to the practical world of implication where these unusual properties of electrons could be transformed into persuasive state-of-art mechanism.