Next part of Nasir’s tutorial on laplace transform…

Since we have established the fact that we can get the algebraic equations from differential and integral equation by using Laplace transform. To remove the undermined coefficients and variations of parameters, we use helpful Laplace transform and for the matter of fact this is most gainful for the input terms like periodic, pulsive or piecewise.

Having boundary conditions, 0 ≤ t < ∞, we consider a function f (t) and its Laplace integral will be:

Laplace transform has the capability of transforming time domain equations into frequency domain. We can analyze the working of interconnected LTI systems. These analyses are done in s-domain. The analysis can be made easy with the help of simulation diagrams.

A simulation diagram is basically the pictorial representation of the systems. It shows the functioning of each component and expresses the flow of signals. A simple block diagram notation is given as:

The figure just denotes functioning parts of a sample system. The arrows show the flow signals. The point where all the signals add up, is called summing point and the takeoff works the same ways as in electrical signals. The block contains the transfer function. If we elaborate it a little more, the simulation diagram can be drawn as:

There are mainly four types of stimulation diagram, which are:

If we connect two systems say, h1(t) and h2(t) in parallel, then its simulation diagram is given as:

The overall impulse response is represented by h (t).

Like parallel combination, consider two systems, h1(t) and h2(t) in series connection, their simulation diagram will be:

The overall impulse response is represented by h (t)

We can write in s-domain

As we know that in time domain it is problematic to solve the equation and finding out the expression for h (t) so that y (t) =h (t)*x (t), also we know that we can solve an algebraic equation painlessly in s-domain to find Y(s).

The transfer function can be attained

Considering an equation for a system:

We can draw the simulation diagram for the system as below:

For this system, the equation in s-domain after transformation will be:

with the transfer equation of feedback system, we will compare this equation, we get:

Consider another function whose equation is given by:

We can represent this as the cascade of two systems:

The simulation diagram of this system can be demonstrated as: 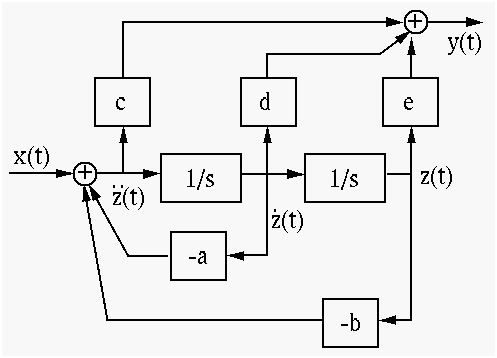 From this diagram, we can generalize the transfer function as:

In this article we dealt with the simulation diagrams and saw how they work for particular systems. When we convert functions from time domain to algebraic equations in s-domain, block or simulation diagrams play a vital role in solving them. It is the pictorial representation of all components of a system and show the flow of signals.