This article has been proposed by a member of the community, it’s mostly a theoretical article about control systems for industrial control and automatism, thus not so close to our usual topics. A good lightweight subject to relax!

I am a young engineering student in France. I study automatic principles that can allow the servo-control of industrial processes. I’ve lately worked on electrical machines servo-control, such as brushed DC electric motor, synchronous and asynchronous electric motor, widely used nowadays in the industry. The purpose is to use correctors such as PI (Proportional Integrator) to adjust the servo-control of brushed DC electric motor. To do this, we often try to reduce the response time of the controller so that it can be neglected to the system mechanical dynamic’s, and so, can be assimilated to a gain, and not to a transfer function anymore, to simplify our studies.

I am wondering if those theoretical principles, effective in simulation (for example in Simulink or Matlab), are currently functioning nowadays in the industry?

Take the case of a brushed DC electric motor (BDCEM) that supplies a mechanical system. BDCEM used to be the most widespread electromechanical actuator for many applications like electric motor drive or applications for variable speed (high performances servomechanism of machine tools and robots).
Since a few years, BDCEM has been abandoned in many fields because of its high manufacturing cost, its significant maintenance (with the collectors) and the appearance of alternative moto-variator groups, said to be more efficient.
In your opinion, could it be possible, with an adaptive servo-control, to come back to BDCEM (that keeps an important place in industrial applications which need good positioning and precision)?

Without servo-control, we have obtained: 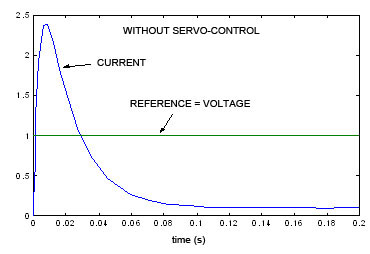 Indeed it was a high current in the motor when starting. On a long term perspective, the frequent power-on/power-off were very bad for the motor, and could lead to its wear or even to its destruction.

Thanks to the equations of BDCEM, we can draw the following block diagram: 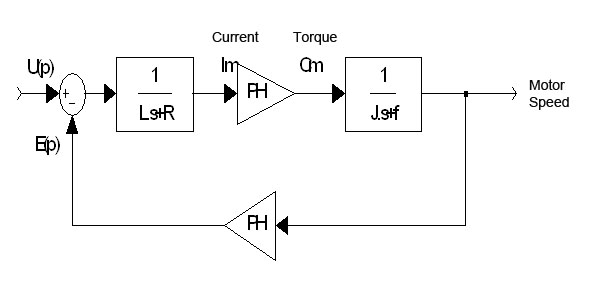 Replacing the diagram in a closed-loop controller of the current, we obtain: 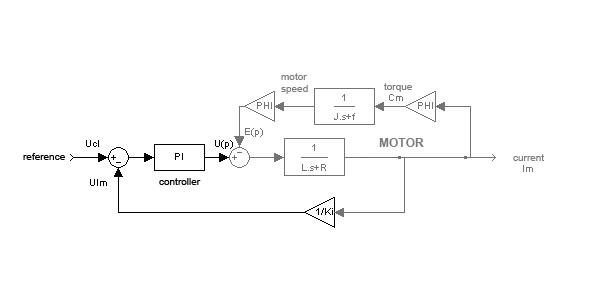 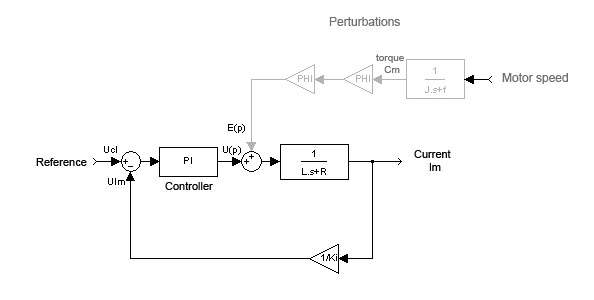 For the current closed-loop controller study, motor’s mechanical constant time can be neglected during the first instants. We obtain a first order system that can be adjusted with the traditional method of PI corrector (Ti and Kpi). So that, we obtain in simulation:
NB : In order to correctly visualize the different variables on the same graph, it has been necessary to put a gain of 1/10 for the voltage. 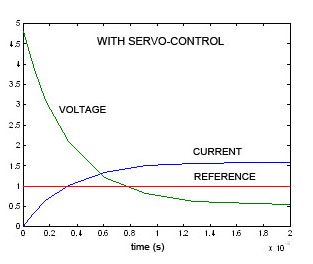 A high voltage is observed at the machine’s starting up, but it does not last. That is because that current is equal to zero at the start of the machine while system has the instruction of a current with a not null value. So that, the system reacts increasing the voltage. Finally we obtain a good curve of the current, without overflow.

So, if this type of system is working in simulation, what really happens in reality?

And if it is a success, why don’t we come back to those old brushed DC electric motor?