What are some Outrageous Ideas to generate Renewable Energy? This is what your fellow electrical engineer Will wants to let us know today with this article.

Enjoy and if you want to publish a debate, article, career story or anything else in our blog, don’t be shy and send us a mail!

Renewable energy has become a very hot topic, gaining huge momentum in the last few years. A wide awareness to the cause of global warming phenomenon and disadvantages of using bunker as a source of energy has prompted countries to think up national policies to promote the installation of technologies that uses renewable resources to generate electricity.

After improving the policies, plus the lowering cost of these technologies (especially photovoltaic cells), it has become a feasible business with varying ROI (return on investment).

Technology is always in a constant evolution which stems from wisdom and innovation, establishing the reason why human beings can reign over other living beings for so much time. As such, technology dedicated to exploit renewable resources is no exception to it. A good example can be found in photovoltaic cells technology where thin film solar cell came about from constant experimentation. 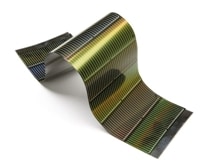 Therefore, we can infer that the technologies we see nowadays, like wind farms, will suffer changes in one way or another.

Some outrageous ideas have been lingered all over the place that could potentially serve as an inspiration for futuristic scenes. Some of them are as follow:

This is not a wide known technology but it actually works, with the first floating wind farm on Scottish waters that started to work approximately on October of this year. The concept is relatively simple, which is installing wind turbines on the sea. It would be no surprise to see in the future a lot of wind turbines invading the precious sight one can appreciate from a beach.

There’s an idea that came from Japan to build an orbital solar farm by using mirrors to concentrate solar energy onto a grid of solar panels, which solar panels would be connected to the electric grid and then distribute the energy. An illustration of this was drawn by John MacNeill and it is shown below. 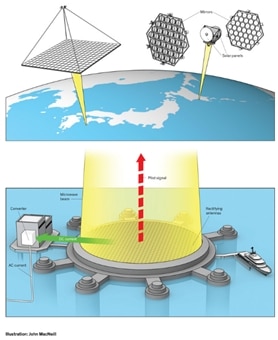 Taking the approach of using the wide volume provided in space can be very rewarding if done right. This concept is not the first of its kind, as we can also see that there is also the concept of building an Orbital Ring surrounding the planet to provide transportation and energy generation.

Various examples of this kind can be found in popular media, where the imagination can sprout in many forms that may serve as an inspiration to future technologies. One of said inventions can be found on the anime series called Mobile Suit Gundam 00, where the Orbital Ring generated electricity through a set of solar panels surrounding the planet in the form of a ring.

An image to show this can be found below: 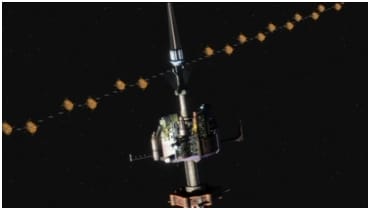 3. Coil in the Orbital Ring

By having a huge ridiculous coil move around the Earth via Orbital Ring, it is possible to take advantage of Earth’s magnetism and generate electricity according to Faraday’s Law.

Thanks for reading,
Will

What are your thoughts on the matter? Do you have any ideas that you would like to share with us? Please let us know in the comment section!