One of our members sent us this article after reading our proposition in the last newsletter. Check it and give your impression. You can send us all type of articles by mail.

“A perpetual motion machine is a kind of machine that runs without consuming any sort of energy or fuels, and in most cases, it is in turn believed to produce mechanical energy which could then be converted into electrical energy, known as perpetual electricity.”

Everyone knows that the earth has only finite resources, and one day or the other, they are going to deplete. No one can deny this fact. Even more so, the ever increasing population coupled with numerous industries, that are using the very limited natural fossil fuels to propel their own growth, in the mask of developing a nation’s future, will of course, never want to let us know this dreadful truth.

But, many centuries ago, even before the industrial revolution began, wise men have already anticipated what was in store for the future generations. They were already thinking of the future ahead and were determined to create machines that wouldn’t use any kind of fuel or energy to work, but in fact, produce energy for free, and that too for eternity! Thus, the idea of perpetual motion machine (PMM) came into existence.

How are these machines supposed to work without using any sort of energy?

The first perpetual motion wheel was said to be explained by an Indian author named Bhaskara (c. 1159). It had a round rim that housed test tube structured containers which contained mercury in them. The hypothetical principle was, as the wheel turned, the mercury in the tubes continues to flow onto the left creating continues gravitational pull that will keep the wheel rolling forever.

Also known as Persian Wheel, no one has ever been able to test this thing in real life. 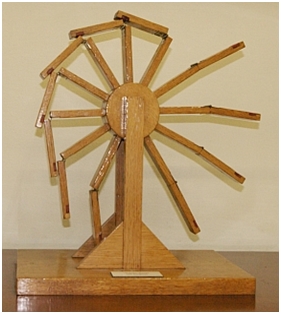 After Bhaskara, there were many artists, authors, engineers and scientists (they weren’t actually scientists, but most of them claimed themselves to be one!) tried constructing different kinds of perpetual machines based on different mechanical principles and tools, but have only succeeded a little, if not completely failed (owing to the fact that these machines would eventually stop when their components start to wear due to friction, they assumed only a little success).

Nevertheless, they have provided us with enough evidence, that a machine, closer to an ideal PMM can actually be constructed as the technology develops.

Is it possible to generate perpetual electricity? 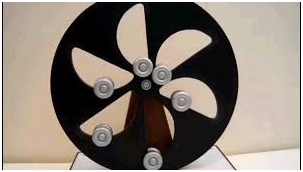 Generating electricity with the help of these hypothetical machines has been a great challenge. Nevertheless, big names such as Renault and BMW (with electromagnetic cars), International Tesla Electric Company (ITEC) with a permanent magnetic generator, (which doesn’t require any energy to work, and has the capacity of producing 26,000 kw of energy every year, for household purposes) have proved that we are getting closer to building the actual PMM that our great historical scientists could only dream of.

Once charged, it itself becomes a primary magnetic field source and starts interacting with other magnetizing materials and turning them into permanent magnets as well:

As our great historical scientists have rightly anticipated, many a scientists, even today are trying to build machines that are close to PMM’s in a quest to produce perpetual electricity which can generate huge savings in both domestic and private sectors.

Though the fact remains that an ideal PMM can never be built, many people have been still relentlessly trying, because, if an ideal PMM can’t be built, something even closer to it would serve the purpose for the mankind.

You’ve been told about machines generating electricity by one of your fellow members of the community. What did you think about his attempt?