New article by one of our devoted members Steven Mill, who wants to tell you about Metal Organic Framework (MOF).

Definition and Formation of MOFs

Molecular organic frameworks or the MOFs are the compounds made up of metals ions and ligands that are linked to organic molecules in order to make a spongy structure. 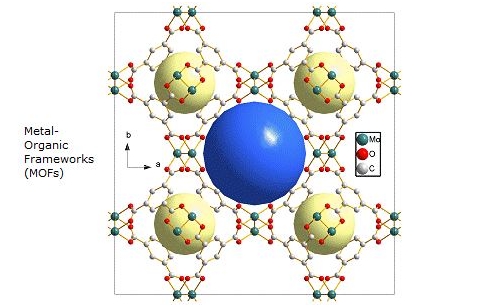 Crystalline MOFs are established by reticular amalgamation, due to which it forms very strong bonding between organic and inorganic parts of the metal-organic frameworks. The sponginess and great chemical and thermal perpetuity of MOFs relies upon the choice of the ingredients that are used to make the MOFs.

If the ingredients are sensibly selected then the inner side of metal organic frameworks can easily be attuned so that it can be used in different applications like gas storage, gas separation, catalysis, and several electrical devices, etc.

The idea of metal organic frameworks was derived from the experimentation and study of zeolites. Both metal organic frameworks and zeolites are created by similar methods i.e. by hydrothermal and solvothermal techniques. The difference is that the MOFs are prepared from ligands that continually remain linked throughout the process of formations whereas the zeolites are formed using templates.

Solvothermal and hypothermal techniques are exclusively used to produce MOFs and zeolites, where crystals are grown slowly from a hot solution. MOFs are totally opposite to zeolites because they are created by joining organic ligands that remain undamaged throughout this process.

When MOFs are altered after synthesis, such opportunities emerge which might not be achieved by the typical method of production. Of probable bearing to hydrogen storage are MOFs with bare metal sites. Such sites have been engendered by post-synthetic organization of extra metal ions to places on the linking ligands, and addition and removal of metal atoms to the metal site.

Since ligands in MOFs bind reversibly, the crystals grow slowly. This often allows defects to be re-dissolved which results in a material with millimeter-scale crystals and a near-equilibrium defect density. For growing crystals which are suitable to structure determination, solvothermal synthesis is very useful. This is because crystals take time of hours and days to grow.

But if MOFs are intended for storage purposes especially for consumer goods, this demands an enormous up-gradation of their production. Scale-up of MOFs hasn’t been extensively studied, but numerous groups have proved that microwaves can be used to nucleate MOF crystals speedily from the solution. This technique which is termed as “microwave-assisted solvothermal synthesis” is extensively used in the zeolite literature. It produces micron-scale crystals within a few seconds or minutes in amounts similar to the slow growth methods.

A solvent-free synthesis of a variety of crystalline MOFs has been described. Usually the organic ligands and the metal acetate are crumpled and mixed with a ball mill. Cu3(BTC)2 can be swiftly synthesized in this manner in assessable yield. The morphology of the solvent free synthesized Cu3(BTC)2 and the industrially made Basolite C300 was same.

Impact and Applications of Metal Organic Framework in Electronics Sector

Metal organic frameworks have received a great deal of attention for applications like separations, gas storage and catalysis. But apart from these, research shows that MOFs have a number of uses in electronic devices. Many sensing ideas in which the chemistry of MOF is utilized to improve sensitivity or to offer chemical specificity have been proven.

But research also indicates that MOFs are rarely a part of any important electrical device. The creation of a small number of electricity conducting MOFs and their acknowledged mechanical flexibility shows that MOF-based electrical devices could be made using these traits.

Moreover, it is clear that the new manufacturing techniques take advantage of the novel characteristics of MOFs and spread their usage to electronic circuitry. The applications of the MOFs mainly concern the development of many electronic materials like photonic, sensing and microelectronics devices. 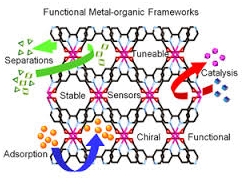 There are a huge number of prospects of MOFs in electronic device applications. Whether they are sensors, semiconductor microelectronics, light-absorbing or light-emitting electronic materials, they work and utilize metal organic frameworks in a couple basic ways.

While considering MOFs as constituents of such electronic devices, it is essential to comprehend how these things work within a device and how they will interface with, or replace other structural and functional elements.

Although, MOFS are naturally known as insulators, but by using tetracyanoquinodimethane (TCNQ), which is also an insulator, conducting thin films of MOFs can be produced.

The combination of TCNQ with some metal ions like Cu and organic molecules, TCNQ forms electrical conductors or charge-transfer complex materials. By soaking a copper-containing metal organic framework called HKUST-1 in a solution of TCNQ, the TCNQ penetrate the pores. As a result, the MOF film produced is 10 6 times better in terms of conductivity than a film without TCNQ.

Furthermore, the outcome is tunable. By changing the exposure time to TCNQ, the degree of the conductivity could be monitored or controlled. This can help in building the electronic devices mentioned before. But still research is to be done in order to make improvements.

Have you ever heard of Metal Organic Framework? What’s your opinion on it?