New article from the series of tutorial that Nasir – one of our most prolific members – wrote on measuring instruments. This time he focuses on ohmmeter.

You too can send us articles. Just send a mail to the team!

What is an Ohmmeter?

Ohmmeter is another interesting measuring instrument that is used for measuring the resistance between any two points in the circuit. It is of extreme importance and is widely used in circuit analysis and debugging nowadays.

As we know that the units of resistance are ohms, so we know that where the name of this device comes from, as it measures the ohms between any two points in the circuit.

How does an ohmmeter measure resistance?

For measuring the amount of resistance in the circuit, the first and foremost thing that needs to be checked is that the ohmmeter should have its own built in voltage supply. This can be in the form of a small battery, typically 1.5 volts used for normal everyday purposes, but different ratings are also available.

For measuring the unknown resistance, the voltage supply of the circuit is first turned off and then the two probes of the ohmmeter are connected to the two points between which the value of resistance needs to be measured. 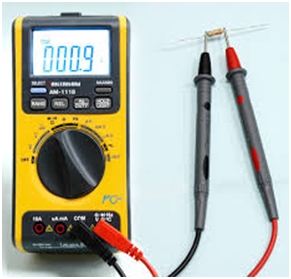 When the ohmmeter is turned on, the current from the battery passes through the circuit and the voltage drop or resistance i.e. the opposition to the electron flow is measured.

Ohmmeters are available in two forms i.e. the digital ohmmeter and the analogue ohmmeter. The digital ohmmeter displays the value of unknown resistance digitally, in the form of numeric digits. And the analogue ohmmeter displaces the value through a moving needed on a marked scale. When the current passing through the circuit is maximum with respect to the input voltage, the resistance is said to be minimum, according to ohms law.

Vice versa, when the current is minimum the resistance is maximum and the needle moves to the extreme left of the scale to indicate the maximum value of ohms, as shown in the figure below:

In order to check if your measuring device is working correctly, just connect the two probes of the ohmmeter with each other.

This should show the minimum level of resistance, which is ideally zero and can practically be a few micro or milliohms.

This was all about ohmmeters for now. I hope this article was useful and helped you in understanding about the working of an ohmmeter.

I have a couple of more measuring devices for you as well. In order to know more about these measuring instruments, keep visiting the blog.

Thanks for reading my articles,