One of our member, Nasir, has thought of another tutorial series which is “Measuring Instruments for Electrical Engineers”.

In this series, he will focus on several instuments one by one and explain how it works and how to use it.

What is an Ammeter?

The first question that needs to be answered according to rules before formally telling about the various functions of the device is that what it is basically used for. So an ammeter is a current measuring device that is used for measuring the amount of current flowing through a circuit.

Since we all know that electric current is measured in Amperes, which is the unit of current, so an ammeter is named after it since it measures the amount of amperes in the circuit.

How does an ammeter measure current?

An ammeter works on the basic principle that when a current changes in a circuit, it produces a magnetic field. There are various types of ammeters and the interesting fact is that all of them are based on this very same principle. Some of the commonly used types of ammeters are:

Although the names are self-explanatory to quite an extent but a brief explanation about the working each of these commonly used ammeters is given below to help you guys understand them better.

A moving coil ammeter is more commonly also known as D’Arsonval galvanometer. It is known as moving coils because when the current passes through the coil of the ammeter the coil moves in the magnetic field produced by the passing current.

One important thing that should be noted about the moving coil ammeter is that the indicating needle of the ammeter at the displaying end moves in the opposite direction of the current due to the polar magnetic field present around the coil. We get the average value of the current through this thing. But since the average value of AC current is zero so this type of ammeter is not suitable for measuring AC currents but is instead used for measuring DC current values.

A moving coil ammeter is shown in the figure below:

One advantage of this configuration over moving coil ammeters is that we can make the coils of thick wire to let pass more heavy amounts of current since the coil does not need to move so its thickness does not need to be limited.

A moving magnet ammeter is shown in the figure below: 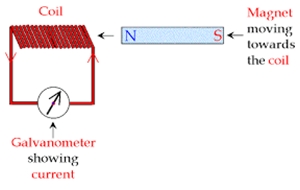 This fact helps such that now we can measure the true RMS value of the current in place of the average value, so this ammeter can be used for measuring both AC and DC currents.

Connecting an Ammeter in the circuit

An ammeter is always connected in series in the circuit as shown below: 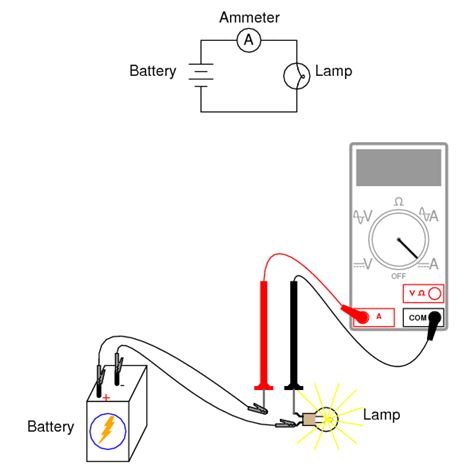 The ammeter can be used to measure both the DC and AC current.

In short it is one of the major devices which is extensively used in our everyday life without even the acknowledgement of a common man. Similarly there are other similar devices to measure the voltage, resistance, capacitance, inductance etc which are used along with ammeters to measure various parameters.

So in our next tutorials I am going to discuss each one of them one by one for better understanding and know-how of these measuring devices.