In order to understand the theory behind the formation of electrical failures throughout the air and to better understand the reasons behind insulation failure, we must go deep into the theories of gas breakdown.

That’s what Carlos wants to share with you all today. He is a consultant for power systems installations and we’re happy to publish his essay. Enjoy!

Gas Breakdown Theory: how it started

All started back in 1901 with an Irish physicist named John Towsend who wondered why the current could flow from one point to the other inside a gas. He decided to make an experiment in which he would apply a DC voltage to a couple of electrodes (anode and cathode) and measure the current between them.
When he started the experiment he realized something incredible. Despite he didn’t applied any voltage, he was still measuring a small current. Why did this happen?

As we know, the flow of electrons is what causes the current measurement, therefore something had to be moving the electrons from one electrode to the other.

In order to find a solution to the problem Towsend came up with two explaining ideas:

Thermionic emission: This phenomenon establishes that the kinetic energy from the atoms and free charge carriers is proportional to the gas temperature.
Thus, increasing the temperature meant increasing the flow of electrons and therefore the appearing of a small electrical current

Photoionization: Incoming photons from the solar radiation crashed on with atoms, releasing electrons and causing a flow of current. This is actually the basic principle of photovoltaic technology.

Once he found out the reasons for this initial current (Io), he started increasing the voltage between the electrodes until the gas breakdown occurred and the streamer mechanism allowed the current to flow directly and continuously from one electrode to the other. When he traced an I/V curve, he obtained the resultant graph seen in figure 1.

The Io current seen between O-A is the initial current described above due to thermionic emission and photoionization.

Between the zone A-B, a ionization process occurred (atoms lose electrons and therefore acquire a positive charge) in which electrons were accelerated and released from their atoms to freely move in the space.
Particularly for this zone, when increasing the voltage (and therefore the electrical field), the current reduces its growth until it reaches a constant “hill” with a constant value, this was due to a recombination process in which the released electrons recombined with other atoms that were missing an electron.
This phenomenon stabilized the current and kept the recombination process above the ionization process.

Between B-C, the electrical field is stronger and the recombination process is not as fast as the ionization process which causes the current to increase. From the C point forward, the recombination process can no longer stabilize the current and so the electrons flow continuously from one electrode to the other, creating the so-called ionization by avalanche mechanism (or Towsend Breakdown process) and establishing the electrical breakdown of the gas. The point C, is generally called the breakdown voltage of the gas. 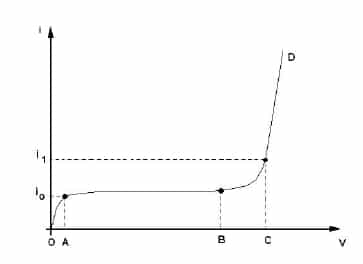 The theory of ionization by avalanche was explained by Towsend as follows:

Alpha Process:
When applying the breakdown voltage, an avalanche effect is created in which the energy transmitted by the electrical field to release the electrons from the atoms transforms into kinetic energy which makes the electrons flow.

In the flow of electrons, some of them will “crash” with other atoms, making them release more electrons and transmit the kinetic energy to them. 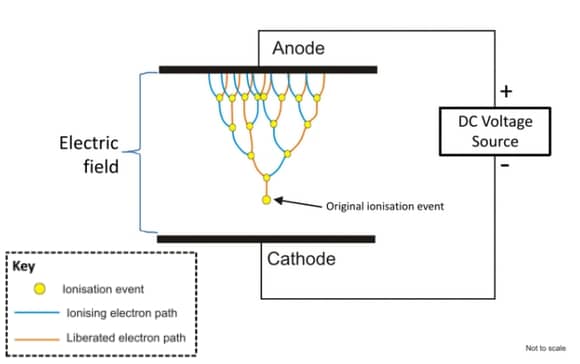 When the first avalanche ends, secondary mechanisms (Beta and Gamma Processes) enter into action in which the neutral charges (the ones which electrons were accelerated) move due to the presence of the electrical field, leading to new crashes of atoms and therefore new ionization processes which end up in secondary and continuous avalanches.

The process described above basically states that the flow of an electrical failure through air (monophasic failure of a transmission/distribution line) or inside a transformer (insulation failure of air or SF6 gas) bases on the avalanche of Towsend process.

Once we understand this basic principle, we can apply the knowledge to practical cases like gas breakdown under different environmental conditions.

Thanks for reading,
Carlos

What do you think about this article and Gas breakdown? Let’s exchange below :)