Here’s the next part of Nasir’s tutorial on Laplace Transform.

In the preceding article we discussed the simulation diagrams. A simulation diagram is basically the pictorial representation of the systems. It shows the functioning of each component and expresses the flow of signals.

A simple block diagram notation is given as:

A flow graph is a simpler representation of a block or simulation diagram. It is the graphical embodiment of the association of dependent and independent variables. Below is the example of a simple flow graph:

Following are the basic elements of a flow graph:

A node is basically the junction at which the variable is present. It signifies a variable. There are two types of nodes:

The assortment of all the uninterrupted branches, having the same direction is known as a path.

A forwarded Path is a path that initiates from an input node and dismisses at the output node is called a forwarded path. A forwarded path circulates once and only once from each node.

The path that joins two nodes is called a branch. A branch mainly consists of a direction and a gain. The Direction shows whether the connection is coming to the node or going out of it.

If a path ceases at the node it initiated from, then such a path is called a Loop. Just like a forwarded path a loop doesn’t pass any node more than once.

The product of all the branch gains present in a traversing path is called loop gain. To figure loop gain out we use Mason’s gain formula, which states: 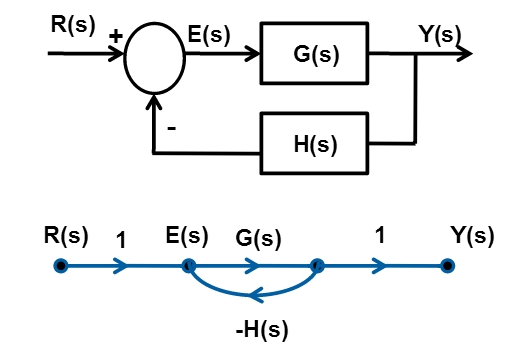 We are having only one loop which touches the frontward track.

R3R4/R1R2 (two non touching twists along with an increase)

1=1 (is a forward path touched by each twists)

1 = 1 (each twist/loop comes in contact with first forward pathway).

To make things more interesting, we are taking a complex example which is not easily solved by clock diagram procedure.

are the increases of feedback twists.

These are the cofactors involved.

The determinant Δ is given by: 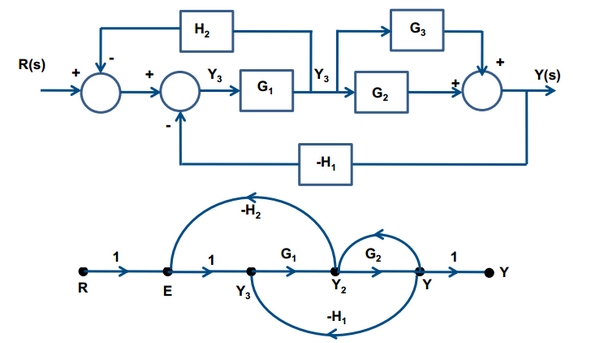 By utilizing Mason’s Gain Formula, we will find out the transfer function. 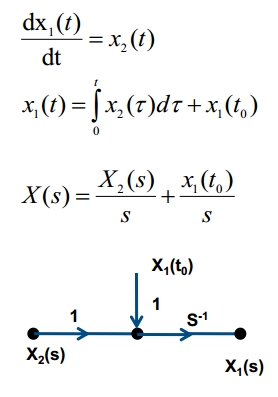 Supposing the initial conditions to be zero, taking the differential equation written below:

After applying Laplace transform, the result will be:

Again we will utilize the Mason’s Gain formula to obtain the transfer function:

With flow graphs, the learning part of our Laplace transform comes to an end. We have discussed from the very basics of the Laplace transform and its orientation to its working and simulation diagrams along with the graphs.

It the upcoming at last part of tutorial we will demonstrate maximum number of example we can. This will help us in comprehending the implementation of the Laplace transform. We shall start with some basic functions and then move further to demonstrate the working of each part of this tutorial.

As usual I thank you all for reading my tutorials!