Muhammad A. is a senior engineer from Pakistan. Last week, he sent us an article in which he gives us a tip: be a fundamentalist!

Read his wise advices below and leave your impressions

Are you not a Fundamentalist?

This is a site about electrical engineering. And you the respected readers, almost certainly, are an engineer. You must be wondering why I am preaching fundamentalism here. Do not be scared, I am not using the word in the contemporary sense. Nor am I using it in its ancient sense. Rather, I am using it in the literal sense of the word.

I am almost certain that you are also a fundamentalist. It is a fact that one cannot get a degree in electrical engineering without being a certified fundamentalist. Could you have obtained your degree without getting a satisfactory grade in circuit analysis? Or without passing calculus? An engineer has to be essentially a fundamentalist, at least to get a degree.

Unfortunately, after having obtained their degrees people tend to forget their fundamentals. It is quite natural with humans. It is something like baking bread and cake daily but forgetting what wheat is. If you have forgotten your fundamentals of electrical engineering you belong to the majority of practicing engineers.

I am a Fundamentalist

On the contrary, I am a hardcore fundamentalist. This is because of my personal experience. My open air village primary school (the only room had collapsed due to heavy rains quite a few years before I entered school in the 1950s) had given me strength in fundamentals of arithmetic and Urdu language. These fundamentals allowed me to gain a funded seat at the most prestigious public school in the whole country.

True, my rustic background and Urdu medium education were initially a severe handicap to me in that public school. I was ridiculed, made fun of, and sometimes, even insulted. I do not know why but I was nicknamed “Dalai Lama” (after the Tibetan religious leader and ruler, now deposed). All I know it was not out of any respect or affection for me.

But the fundamentals carried from the rustic education helped me gain a quick transition. I had no difficulty in mathematics, so I turned my attention to English language and soon I was floating. At the end of the first term I stood second in the entire batch of five dozen students. Sorry for bringing in my personal details. I neither want to impress you with my achievements nor to bore you. But I do want to convince you that fundamentals are very, very important.

So I will jump a few years ahead and humbly request you to move with me in time to the day of summer solstice in year 1970 when I got my basic engineering degree. My first job was in a maintenance organization of very good repute. I liked my job which included repair of electronics equipment used aboard aircraft owned by the Air Force. It was here that my faith in the utility of fundamentals was reinforced. There was more than one instance. I will narrate only one here. 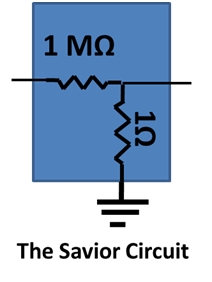 There was a certain essential piece of armament which had to be tested regularly. One of the test instruments used was a source of one microvolt at a known frequency. That instrument went out of order and was not repairable. It was a specialized single instrument of its type with this organization, and no equivalent was available anywhere in the country. Import of a replacement instrument was not expected in any reasonable time. But the testing could not be delayed. The customer was a very important one.

A way had to be found out of this crunch. An oscillator of the right frequency was found but there was no instrument sensitive enough to set the voltage to one microvolt. The most sensitive voltmeter in town had a least count no better than one millivolt. Remember it was nearly half a century ago and in a developing country. It was here that fundamentals rescued us.

A voltage divider was made out of a one percent resistance of one Mega Ohm and another of one Ohm which were luckily available. The oscillator output was adjusted to one volt with the help of the voltmeter and applied to this voltage divider. The output taken across the one Ohm had no choice but to be one microvolt. This output was fed to wherever it was required to be fed through a series resistance to provide the right impedance.

I do not remember the exact details but matching the impedance on the input side using a shunt resistance should have posed no problem. The armament test routine was carried out successfully and the equipment returned to the customer in time without anyone knowing what had happened.

At another time I will relate to you a very interesting story of one or more brilliant use of fundamentals in a very important application.

Thanks for reading,
Muhammad.

Great first attempt! What do you think about Muhammad’s words on being a fundamentalist as an engineer? Are you? Do you agree with that? Leave a comment below!