The primary purpose of cables is to provide a conduit for power transmission from the source to the end user. Over the years, engineers and scientists have worked tirelessly to get the best materials for functionality and project feasibility. 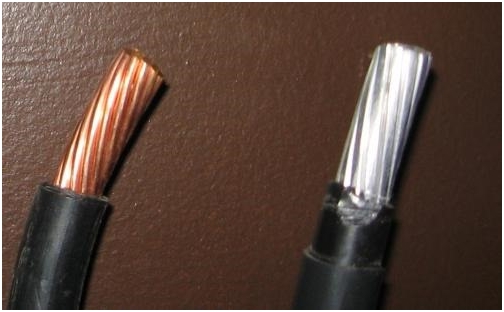 Copper, has been in use since the 1820s for power generation, distribution and transmission purposes. Copper conductivity is only second to silver, but the former is more extensively used due to economic viability and ease of acquisition.

For regular LV and MV use, a highly refined electrolytic-tough pitch copper (copper with a small percentage of oxygen) is used to present the following properties:

Aluminum is a third the weight, and 61% the conductivity of copper. Aluminum was traditionally used in the 60s and late 70s when copper was scarce. However, the galvanic reaction between aluminum and other cables, especially copper and brass in the presence of moisture is highly detrimental.
The corrosion leads to frequent disconnections, short circuits, and costly repairs. One of the worst detriments of the galvanic effect is a high resistance at the point. This leads to overheating and fires. In fact, most governments released reports for cessation of use for residential purposes due to high frequency of fires.

Another disadvantage is oxide formation on the surface, which increases cable resistance and difficulty in soldering. However, this does not mean that aluminum is not used in MV applications.
A significant number of industrial and commercial feeders use aluminum cables for power distribution due to the low cost and light weight, as long as proper terminations, connections and devices are used. The high current cancels out the chances of corrosion. However, due to the lightweight property, the cable is wrapped around a steel center for support, especially for long overhead spans.

Silver has a better conductivity than copper due to lower resistivity (1.06 times that of copper). However, the high cost and low tensile strength makes it unviable for large projects.

Chief applications include providing skin conductivity as a coat for copper cables to reduce the skin effect present at high frequency currents and joint plating.

Traditionally, tin was used to provide a layer of protection over existing copper conductors. The natural rubber used for insulation contained high levels of sulfur from the vulcanization process, which consequently corroded the copper surface. Less sulfur used in the process presently, as well as the inclusion of plastics and ceramics for the insulation has seen reduced tin use for electrical cables.

However, tin is used sometimes in cases where copper conductors terminate in soldered lugs due to the ease of soldering, as well as the fact that it does not affect the existing cable conductivity.

Galvanized steel is primarily used where high level of mechanical protection is required, as well as significant chances of high pulling forces, such as underground and deep sea cable laying.

Mostly braided, or used as a helical cage, the steel offers a strong yet flexible cable. Mild steel on the other hand is used for land installations

Phosphor bronze is an amalgam of copper, tin (5-10%) and phosphorous (0.1%) to provide an alloy with higher mechanical strength than pure copper. Primary uses of phosphor bronze include:

Installations in polluted and aggressive soils such as chemical plants, storage tank farms and refineries use lead in extruded form for cables due to low reaction properties and comparative inertness. However, extruded lead has low mechanical fatigue resistance properties, therefore cannot be used in areas where regular physical movement is required.

In cases where the site features polluted soils as highlighted, but are located offsite, manufacturers add tin and antimony to improve the ability to withstand the fatigue associated with long hauls.

What do you think of this article? Leave your impressions below!