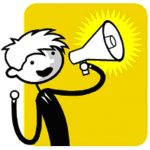 No one among us could consider a life without electricity. From social media to the entertainment industry and from the healthcare to educational institutions – its electricity alone that is powering wonders for us.

However, we seldom pay attentional to the health and integrity of our domestic electrical systems. The situation is much better at the commercial level and industries as they usually operate with dedicated manpower and resources for taking a good care of their LV, MV or HV electrical distribution system.

That’s the topic that your fellow electrical engineer B.Q. chose to tell you about today. Enjoy and comment!

Say No to Ad-Hoc Electrical Arrangements

Sometimes we start ignoring bad practices and unsafe conditions to keep our electrical requirements fulfilled. Ad-hoc connections, continued operations of known problematic devices and other small looking issues are considered as, “harmless” and ignored for years or at least until the transformation of any such malpractice into a full-fledged “disaster”.

Bad Electrical Practices: 2 most common ones

Today, we will be discussing two most common bad electrical practices.

First one is about misconducts, we often observe when a temporary expansion in the existing electrical distribution is achieved by means of extension cables and electrical outlets. A cycle of misconducts and bad practices generally leads the system to certain abnormalities and overloading is the most important one to be mentioned here.

The second issue we are going to discuss today is somehow connected to the first one. It is about the maintenance and selection of basic electrical gears, socket, switches and cables – which are employed for the energization of portable electrical equipment, “on need” basis.

It is one of the most common bad practices and a dangerous one as well. At times, a need for temporary connections and an extension of electrical energy may become necessary for the energization of far located equipment. In most cases, it is achieved by means of extension cables as their connected plugs are coupled with the appropriate receptacles or sockets. However, it’s seldom checked – whether the existing system, selected cable and the male / female receptacles being used are of the suitable rating or not?

In addition to this, most people don’t even check, if the existing electrical distribution system is capable enough for bearing any additional load or not? The addition of any load resulting in the overloading of an electrical system, wire or plug is a dangerous practice. These situations could be damaging and risky even for the load attached (a motor driven pump for example).

We all know, the overloading of electrical cables and other gear used in the distribution of electricity results in their heating. The heat generated could possibility damage and end in a melted receptacle, cable etc. 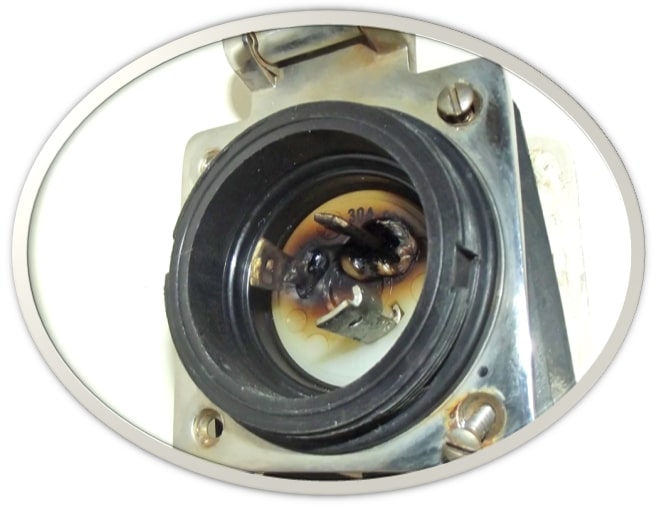 By experience we found that the mere heating, burning and melting of electrical cables could become the triggering factor of a short circuit and more catastrophic events as well. The health of the electrical devices to be connected on a temporary basis through makeshift arrangements should also be ensured prior to take them in service.

At times, issues might get a trigger from the receiving end and not from the supplying end. Generally, portable electrical equipment is tested for its internal and external health and its record is also maintained. We believe it is a good practice and could help in mitigating the associated risks.

In our view, a permanent solution should be preferred in situations where rough-and-ready electrical supply arrangements become a routine thing. Assess load, chose an appropriate source and lay down the cable – say no to the risky ad-hoc systems!

CAUTION: Never proceed with non-explosion proof equipment in classified areas where explosive or flammable gases and liquids are handled. Always do a, PSSR (Pre Startup Safety Review) before the energization of any newly installed circuit or device in such areas.

These Issues are 100% relevant to Domestic Consumers as well! 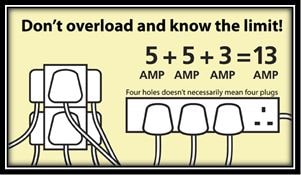 Whatever information provided above is valid for domestic electrical distribution systems too. We believe – the overloading of electrical outlets should be considered a more serious condition as far as the residential and commercial buildings are concerned.

Industrial electrical networks are managed and supervised by qualified electricians. Certain preventive maintenance plans and audits are done on the routine basis and issues are generally caught within time.

However, the electrical system in service at the resident and commercial properties operate unsupervised for prolonged periods. Unfortunately, electricity consumers are still not well learned about the inherent hazards of power they are receiving as one of the most important utilities. We believe every consumer should learn and understand about basic phenomenon just like the overloading of electrical systems.

Upkeep of the End Electrical Equipment 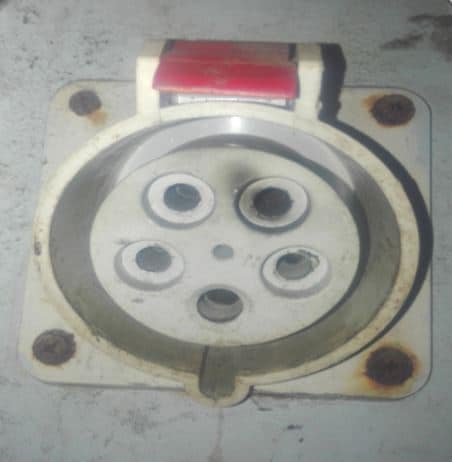 Although, not much is needed as this image is quite vocal by itself. However, let us discuss the distinct issues with this receptacle installed at a “state of the art” power generation facility somewhere in Asia.

In this case, we can see clear signs of heating and sparks. Another big issue to be highlighted here is the nonexistence of its protective cover or lid which is used to keep the receptacle covered when it left uncoupled. So, this receptacle is prone to dirt, insects and moist air.

These rusty screws are indicating the moisture rich atmosphere of the area where this socket is installed. Remember settling of foreign particles on conducting surface depletes the useable contact area.

This situation could lead to several abnormalities including but not limited to:

In short; appropriate installation, maintenance, handling and usage of these devices is a very crucial thing. We don’t appreciate the use of substandard and poorly manufactured electrical receptacles.

We have seen them failing and bringing a damaging impact on electrical and other equipment installed nearby. As we have talked a lot about the receptacles today so let us provide you with an example. Here comes a suitable and reasonable receptacle for general applications. 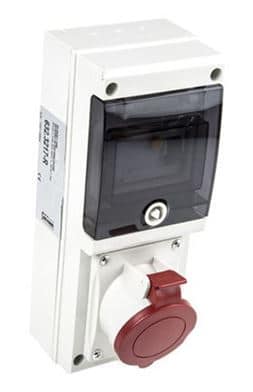