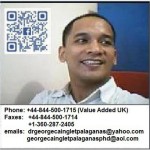 Electrical Engineer with extensive computer/mathematics teaching and telemarketing experience, works part-time as Payment Collection Manager, wants to work with a large telemarketing company. Has wide experience in different computer platforms including IBM 9151 Mainframe, SPARC Workstations, desktops(PS4) and notebooks running on different OS including UNIX(Solaris), Windows XP/Me, and VMS over the years. Has worked with several Internet Browsers including Navigator,Explorer,Opera and Mozilla Firefox. A novelist, have written several novels including The Millennium Man, Ychtulla, Primate Return of One Twelve and many others. Written several text books including Datastructures in Turbo PASCAL and Polyquant. Have been to Vancouver,B.C.Canada as a caregiver, travelled also to Hong Kong, and Calgary,Alberta under a government program called Project Isabela. A member of Meralco Manpower Pool in Meralco, Ortigas, Pasig, have been to three interviews with the company including transportation extension but failed to get in. A former seminarian with Mother of Good Counsel Seminary, his awarded doctoral degree from University of Norte Regina is a product of his successful monitoring and lobbying of Ukatze's accreditation in the United Nations and the protest on Jakarta's occupation of Terang's relative position on the mercator map.