Hi, I’m Steven Mill and today I want to tell you more about Thermo-Chemical Solar Power.

Depleting fossil fuels like coal, oil and natural gas is a concern shared by every scientist, environmentalist, economist and entrepreneur in the energy business. They are now looking beyond these energy sources and a number of viable options appear to interest them. One of those options is Thermo-Chemical Solar Power.

Solar energy is a renewable form of energy and a number of companies have created cheap and effective solar panels for electricity generation. But these panels offer a limited amount of output energy and about 60-85% of the input energy from the sun is lost in the form of heat.

What if this heat could be stored and utilized? What if we could create panels and rechargeable batteries with a much longer life and better efficiency? These questions urged the scientist in several parts of the world to work on creating something much better.

Professors at MIT made it possible and after extensive research and experimentation they came up with a method of storing the heat energy lost in a panel. They used the concept of thermo-chemical solar power generation.

The concept is very intriguing because unlike conventional solar power (in which energy from the sun is converted into electrons), it suggests that the infrared radiation can be stored in a chemical compound and then used later. 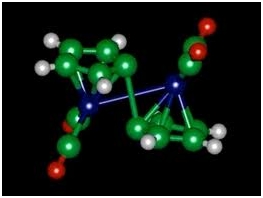 The compound used for this purpose is known as “Fulvalene Diruthenium.” The organic part of this compound is called Fulvalene which is a cyclic organic compound that forms stable ligands or organo-metallic complexes with certain transition metals like Diruthenium. The bonding of these two substances makes it possible for the resultant compound i.e. Fulvalene Diruthenium to absorb photons or light energy.

When exposed to U.V light, the C-C bond joining the two sides of this compound breaks off reversibly and energy is absorbed during the process. Fulvalene Diruthenium transforms into a high energy state compound and can remain stable in that state. When needed, it can be triggered by using a small amount of heat or a catalyst to return to its original state and release the absorbed energy.

The energy released by a single complex is very minute, but when this reaction takes place with a million or more complexes, then the energy produced is enough to power up a motor and to generate electricity. 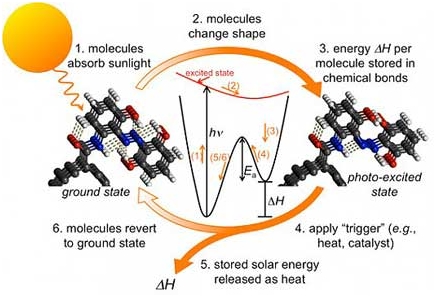 Besides the use of organo-metallic complexes, high temperature heat storage tools that can be easily incorporated into the upcoming solar power plants are another important means of generating energy efficient solar power. In this regard, storing heat energy by reversible gas–solid reactions technique is not only a potential way to gain high storage densities, but it can also be made adjustable according to different plant configurations.

The process involves the reaction of Ca(OH)2 with CaO. This reaction can is considered suitable because of the fact that the storage densities achieved are above 300 kWh/m3 and the operating temperature range is about 400 to 600°C.

Incorporating this technology in fuel reactors that can conduct indirect and direct heat transfer is also considered for this purpose. But a typical reactor doesn’t seem fir for this purpose because the low thermal conductivity of the fixed bed of reactants considerably limits the working output of a storage tank and there is also an indirect heat input through the reactor walls. So, to avoid this, a storage reactor model with single dimension is developed and the Finite Element Method is used to avoid the extra input. This reactor concept with uninterrupted heat transfer by passing the reactant in gaseous state along with an inert gas through the solid reactants provides far better results and energy gained is also great.

But there are several other factors in play that limit the amount of energy given out. To overcome such hurdles, the reaction kinetics should be fast enough and the pressure during the conversion of the reactants from one state to another should be controlled and maintained in a certain pressure range. 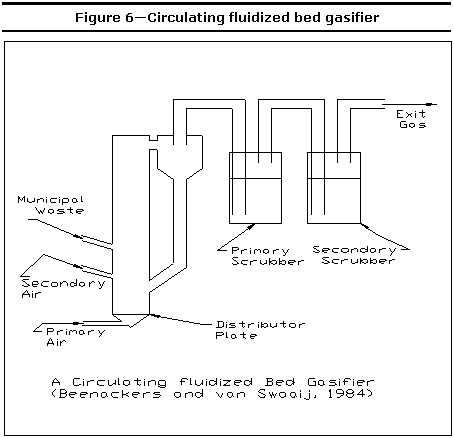 Thermo-chemical solar energy is an emerging technology and has a number of potential applications in domestic and industrial sectors. It can be used for domestic heating, for hot water purposes and for central heating systems. It can also be used to generate enough energy to power the electrical appliances.
Researcher are also working on making batteries with fulvalene diruthenium coating so that they may have a long-life and may also be more energy efficient than ordinary batteries. 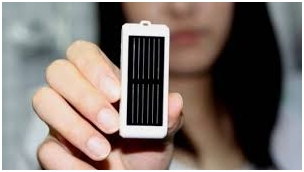 Thermo-chemical solar power is the future of solar energy, but it is still under research because there are several problems that hinder its large scale installation. For instance, diruthenium- the metal that forms a complex with fulvalene is a rare earth element and is very expensive.

Besides the cost factor, there are some other problems that should be solved. Researchers are very optimistic that soon they will overcome all the problems and this technology will hit the markets.