The generation of electric power from renewable energies is the new boom in the world market. There are different types of clean energies from natural sources such as the sun, winds, tides, etc.

In particular, the energy from the sun has some advantage over other types of energy. It is theoretically feasible in almost all the terrestrial globe. Harvesting solar energy is possible now thanks to the photovoltaic cells.

The solar cells are connected, typically, to a DC-DC converter or to a DC-AC converter, depending on the application. We can observe the scheme of a system with both converters shown in figure 1 to illustrate us.

Additionally, the cells have an I-V and P-V curve, as shown in Figure 2, obtained by tests with controlled conditions. It is evident that the power supplied by the module is dependent on the connected load; that is, it is not possible, automatically, to get the most out of the solar panel, especially in large arrays in series, parallel, or parallel series. The tracking algorithm of the point of maximum power transfer is developed to solve this problem, using the power curve supplied by the panel with respect to its voltage. 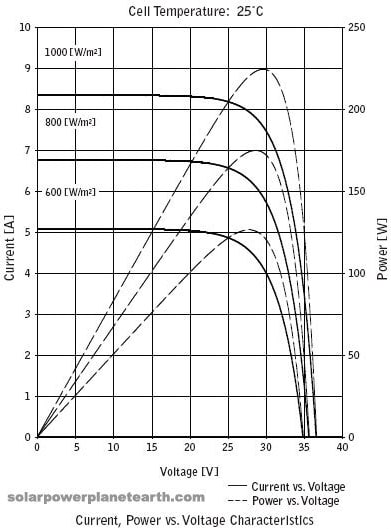 Solar Panels Optimization: what is MPPT?

The MPPT is an algorithm used in the DC-DC converters to obtain the maximum power of the photovoltaic modules, for this, the duty cycle of the converter is varied, managing to vary the voltage of the module to the point of maximum power.

It should be noted that this point varies with temperature and solar radiation; therefore, it is constantly changing. There are several algorithms to find the MPP, among the most used by the literature we can find: Disturbs and observes (P & O), Incremental Conductance and Fuzzy Logic [4] [5].

This is an algorithm derived from the hill climb method. By varying the voltage (which is produced by modifying the duty cycle) the power is varied.

In Figure 3 we can see the diagram flow of this algorithm, as we see, we have the values ​​of the current and previous iteration, from the comparison of these two variables we determine the action that must be taken to reach the MPP of the photovoltaic module.

The facts mentioned above can be explained in the following way. There are always two variables that are constantly been evaluated, one of them is current and the other is voltage. These parameters change instantly, and the power differential obtained from the previous instant indicates whether or not the MPP is located above or below.

Solar panels represent an important investment with a return rate located in the medium and long term. It is then necessary to maximize the power that each module or the complete array is capable of delivering at all times.

Based on this algorithm choosing an MPPT charge controller ensures that the solar energy produced by the panels will be used at the maximum point throughout the day, especially in small installations.

It should be noted that the efficiency of this method is approximately 96%, but it can be improved if the rate of change of the work cycle is decreased as the algorithm reaches the point of maximum power. 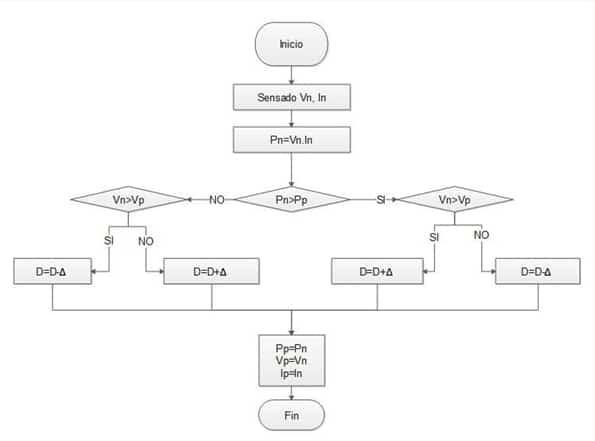 [3] Solar energy for Sicily’s remote islands: On the route from fossil to renewable energy.Rosaria Ciriminna and Mario Pagliaro and Francesco Meneguzzo and Mario Pecoraino 2016.