Building smart buildings with efficient MEP systems has become a popular trend in the last few years all over the world. Lighting systems are no exception to this trend.
HVAC and lighting are two of the major systems who consume a lot of energy in a building.

That is the topic Will one of the members of the community wants to write about. Hope you’ll enjoy it!

With the global warming phenomenon changing the ecosystem of our planet little by little, installing new efficient systems to reduce contribution to global warming as much as possible has been one of the strategies been implemented to face this problem. Additionally, installing and using efficient equipment translates into economic saving to the building owner in the long run.

In this post, we are going to explain a little bit of how lighting control began and developed, and then get into the technology that is going to mark a difference in the future.

The birth of lighting control occurred by applying a simple on/off control strategy on the lighting source. One could also argue that the beginning of a lighting control system as it is began when designers decided to incorporate different levels of illumination in the aesthetics of a room.

Regardless of how it began, it wasn’t done purposely to save energy.

Nowadays, lighting control systems are able to do much more than how it was in the beginning. Thanks to the different bright people, inventors, engineers, and team behind the development of the control system, we can enjoy the different kinds of strategies there is to employ in an area or room.

What began as a manual control of lighting (on/off switch) further developed itself into automatic control whether it is to use occupancy sensors to automatically turn on/off the lights or using software to schedule the lighting profile for specific hours in the day.

One of the key components in defining how the lights are going to be controlled is by implementing the appropriate technology and wiring it is going to be used for the control. What started as line-voltage wiring between luminaires went to low-voltage wiring as the most used wiring method at the moment.

At present, it is fancy using lighting control system technology that uses CAT-5e as the wiring method between control equipment. In doing so, it is comfortable to treat the lighting system and the electric system in an ongoing building in construction as two different building blocks.
Thus it is easy and manageable to do proper maintenance or install additional luminaires to the lighting system.

Lighting Control: what to look forward to

The development trend for the lighting control system is moving towards a wireless link between control equipment and luminaires driver. There are two major benefits that can be obtained from this transition which are:

One of the downside of this type of technology that uses a wireless approach is that its cost is high. Also, the technology itself has a lot of room for improvement, thus we can expect that it will be a widespread technology in the future.

There are two major variations that we can get from wireless technology. Those two variations are:

This kind of system takes into account the versatility of the approach of free topology between equipment. That is, if there is any ballast or driver who is malfunctioning somewhere in the topology of the control system, the communication between the other luminaires are not affected.
The reason for this is because the communication link can travel with another route, thus making the system very robust. An example of this type of technology can be seen in the figure below from the brand LG. 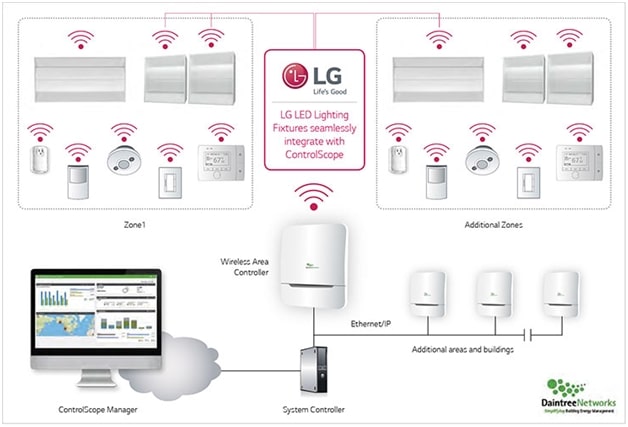 This kind of technology avoids the use of routers and controllers to make the luminaires be controlled automatically. Everything can be controlled with the cellphone. An example of this type of technology can be seen in the figure below from the brand Acuity Brands.

If you purchase and ECLYPSE controller now, it includes an add-on equipment to make it useable with nLight AIR when the technology is able to link with it.

After this kind of technology grows over the time, we can expect luminaires in the supermarket to send emails to inform nearby customers of any discount in a product on their proximity or a luminaire that can change color automatically according to the mood of its customer in a restaurant by looking up their last few items accessed in the web.

There is a lot of potential in using the lighting system for other applications besides changing the illumination color or saving one can get from it. It is just a matter of how much the interested parties are willing to bet on it.

Thanks for reading,
Will.

As you have finished reading this post, what are your thoughts on the matter? Please share it with us on the comments section, we would love to know about it!