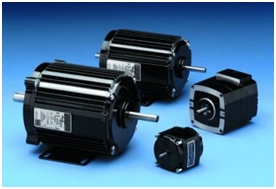 A capacitor is a passive two-terminal electrical component used to store energy in an electric field.

A capacitor consists of at least two electrical conductors separated by a dielectric (insulator).

The electrical energy in the dielectric is then used to provide extra energy to start a motor. Less energy is thus required from the main source to start the motor. An ideal capacitor is characterized by its capacitance. This is the ratio of the electric charge on each conductor to the potential difference between them.

The SI unit of capacitance is farad, which is equal to one coulomb per volt.

Capacitor start motors have the same running characteristics as their split phase counterparts. They are just a modification of the split phase motors and have better efficacy. 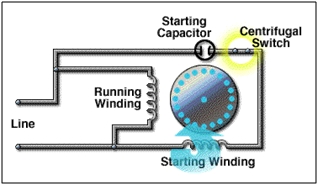 Here comes the modification in a capacitor start motor.

A phase shift closer to the 90 degrees is possible through the capacitor-start system for creating a rotating field.

This system uses a low reactance capacitor placed in series with the start winding to provide a phase shift of approximately 90 degrees for the start current.

This covers the lag in efficacy of a split phase motor and results in greatly improved starting torque.

Single-phase motors are noisier because they vibrate at 120Hz when operated on a 60Hz power line. Resilient rubber mounting can be used to reduce the noise, but no attempt is totally effective in eliminating the high vibration noise.

The capacitor run motor is more useful because it can be designed to have low vibration under a full-load. The capacitor shifts the phase on one of the windings so that the voltage across the winding is at 90° from the other winding.

Achievement of this angle of 90º across the windings makes the capacitor run the motor as a two-phase machine thus reducing the noise.

No centrifugal switch is required in such a motor. The motor is noisier when it runs at no load but much quieter when running on full load.

The power factor can be brought up to 100% if the proper value of capacitance is chosen, and the currents through each of the two equal stator windings (under full-load) adjusted accordingly. In a capacitor run motor, the starting torque becomes quite low.

These devices should not be started on severe conditions as it may damage the windings because of the excess heat produced.

The power output (in horsepower) of the motor is defined as follows:

Where, ωrpm is the motor speed in revolutions per minute, TNm is its torque in Newton-meters.

Run capacitors are usually made of polypropylene film. These are designed for continuous duty which means that and they remain energized the whole time the motor is running.

Run capacitors have a range of 1.5–100 microfarads (µF or mfd), with voltage capacity of 370 V or 440 V. A capacitor is required in a single phase motor to energize a second-phase winding.

A magnetic field will not be created in a motor if the wrong run capacitor is installed. The wrong runs will cause the rotor to stop at the uneven spots. This would create noise in the motor and increase energy consumption leading to a drop in performance and eventually overheating of the motor, thus damaging it.

Start capacitors which are non-polarized Aluminum Electrolytic Capacitors are usually above 20 microfarads (µF). They always contain non-solid electrolyte and can only be used for the short motor starting time.

Start capacitors increase motor starting torque for a short duration which allows rapid cycling on and off of a motor. Start capacitors can also have a rating of above 70 microfarads (µF).

Such capacitors have four major voltage classifications: 125 V, 165V, 250 V, and 330 V. in some motors a start capacitor and a run capacitor are used simultaneously.

After that, a run capacitor runs the motor with greater efficacy.

Two electric motors are supported by a dual run capacitor. For example in large air conditioners or heat pump units, both a fan motor and a compressor motor are present.

Dual run capacitors have a variety of sizes which depend on the capacitance (µF), such as 40 plus 5 µF, and also the voltage.

In air conditioning, round dual run capacitors (shaped as round cylinders) are commonly used.

An oval dual run capacitor can be used in place of a round capacitor, but in order for it to work properly the mounting strap should be so that it fits the oval shape better.

This was a very basic explanation on Capacitor-Start (CS) Motors. Did it help you anyway?