Nowadays, saving energy is a major concern and the electricity area is no exception to the rule. As electrical engineers, you necessarily apply technologies or devices which aim to improve energy efficiency.

Among the front runners of these technologies stands the LED technology (Light Emitting Diode). It is indeed among the most significant progress of the last years; to the extent that LED lighting is about to become the global standard, coming after classic bulbs that soon won’t be sold by the manufacturers anymore. Notably intended for commercial and industrial buildings, and also for infrastructure (outdoor public lighting), its success lies in the fact that it produces a very efficient luminosity compared to conventional incandescent lamps.

Everybody seems to agree with the fact that LED technology is the future of lighting. However, several electrical installation professionals warned us with 2 major issues highly questioning its use.

1) Overvoltage and random tripping when switching on

When a LED luminaire is first energized, a variable current is required during the first milliseconds, and then the current stabilizes as soon as rated operating conditions are reached. Three transient fundamental events occur during the start up phase: the power supply of the luminaire, the start of the driver, and the powering of the LED module (that is to say when the light is on). Then the luminaire transitions to the steady state operating condition. 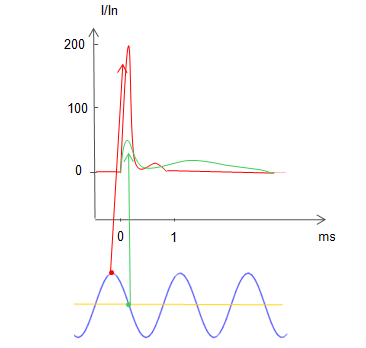 During the switching on, a peak of very significant inrush current occurs before 10 milliseconds. At that very moment circuit breakers can trip; this happens very often. Normative curves used for circuit-breaker certifications (the “standard” curves defined by NF EN 60898 and NF EN 61947-2) characterize fault currents of a duration exceeding 10 ms, and thus correspond to the circuit breakers’ tripping threshold for currents maintained for 10 ms or more. For transient currents of duration less than 10 ms, no normalized curve exists!

In other words, the LED technology can make your installations trip by nature! For circuits with more than 20 LED luminaires, the reliability during the switching on remains very uncertain; the tripping is random.

“Lately, we’ve been told that a large supermarket chain had decided to swap its 6000 classic bulbs (CFL) for 2000 LED bulbs. In theory, everything was fine until the first employee of this supermarket arrived at dawn the next day. The man says that this morning, as he intended to switch on the 2000 luminaries via the electrical panel – surprise – he had to start again and again due to circuit-breaker tripping before he managed to do it!” 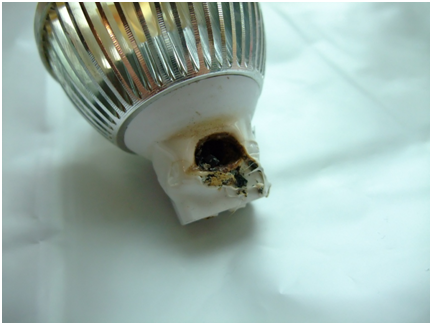 LED-technology luminaires contain electronic components, which make them very sensitive to surges, which can damage or even destroy the power supply drivers and LED components. This high sensitivity to lightning surges can considerably reduce the LED luminaires’ theoretical lifetime.

“To save energy, a French village chose to adopt LED technology for the outdoor public lighting, to cut-down their electricity bill. But after the installation, it turned out that using LED luminaires cost more money since these luminaires “burned out” during each stormy episode and had to be replaced.”

These feedbacks about LED technology being neither reliable, nor economical, are highly disturbing. This made us decide to raise this alert. Moreover, these issues seem to be “hidden” due to lobbying.

Here, at the Electrical Engineering Community, we decided to investigate these phenomena. As a matter of fact, we’re wondering if they are isolated cases or if, on the contrary, these issues are really observed by everybody.

That’s the reason why we invite you to answer these few questions:

Have you ever noticed one of these issues?
If you have, in which context was it?
Did you find solutions to countervail them?

Let’s share our experiences and let’s investigate together. We thank you all in advance for your answers, because helping us means helping all the electrical community and thus yourselves.

To receive the username and password to access to this LED resources area, simply send us an email and give details about the issues that you’ve noticed in the installations with LED luminaires. And if you never had any issue, please tell us too; every information is worth taking!

PS: Those who’ve already sent us details about the issues that they noticed will automatically receive the username and password to access to the resources area.