Artificial lighting was first invented to illuminate a room in times of darkness. But recently, beyond just the purpose of illumination, artificial light is more of being used as an aesthetic element in the modern architecture of many kinds of spaces. Conservation of energy is also one of the main considerations in the modern life of the human race. Artificial lighting accounts to about 15% of the energy consumption of a typical building. It is then obvious that it depends on the supply of energy and this energy – which is mostly of electrical form – should be used efficiently.

Old model bulbs were made of incandescent globes which use a tungsten filament enclosed in an air-tight clear glass case filled with an inert gas. A high electrical current is used to heat the filament until it glows while the inert gas protects the filament from oxidation. This process is estimated to use around 5% of the electrical energy to produce light and the rest is converted to heat.

New electrical bulb inventions mostly concentrate on improving this disadvantage. Two of the most common such electrical bulbs are the Light Emitting Diode (LED) bulb and Compact Fluorescent Light (CFL) bulb. These new-tech bulbs are designed to replace the incandescent bulb in form and function but with a much improved efficiency of converting electrical energy to light. However the use of any of the two has its own pros and cons. 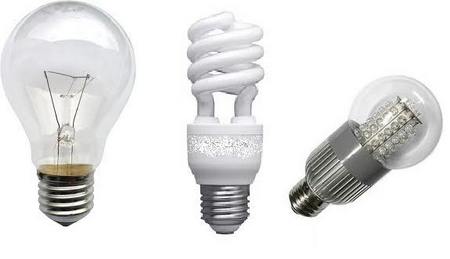 Typical incandescent, CFL and LED bulbs (as they appear from left to right)

These bulbs are made from a cluster assembly of small solid state light emitting semiconductors that work by the principle of electroluminescence. Even though these diodes were originally small in size and produce a weak intensity of light, they have been improved to be brighter. The grouping design is also made to resemble the shape of the incandescent lamp and the connector is made to fit outlets that were designed for the incandescent lamp. These bulbs are advertised to use only a third to a tenth of the amount of energy other kinds of lamps will use to produce the same amount of light.

As their name indicates these lamps are fluorescent lamps constructed in a compact shape and size. The working principle here is using electrical discharge to excite a small trace of mercury vapor – which is trapped in a glass tube that is coated with a fluorescent material – so that it produces ultraviolet light. The ultraviolet light causes the fluorescent coating to produce bright visible light. In order to support the discharge across the tube, electronic ballast is housed in the base of the bulb. This process uses only one third to one fifth of the energy an incandescent lamp would use to produce equivalent amount of light.

Comparison between LED and CFL

What do you think about this comparison between LED and CFL? Is there any others pros or cons in terms of efficiency, durability, cost, environment or versatility?