In an electrical circuit, the active power P is the real power transmitted to loads such as motors, lamps, heaters, computers … The electrical active power is transformed into mechanical power, heat or light.
In a circuit where the applied r.m.s. voltage is Vrms and the circulating r.m.s. current is Irms, the apparent power S is the product Vrms x Irms.

The apparent power is then the basis for electrical equipment rating. One piece of equipment (transformer, cable, switch …) must be designed in relation to the r.m.s. values of voltage and current.

But what is re active power ?

Re active power Q is present when voltage and current are not in phase. In this situation, the current can be split up into two components:

The problem with the reactive power is that it is impossible to manage without it, and it is resulting in an increase of equipment rating.

It can be compared to the foam in a glass of beer : it is not the real stuff, but there is no way to avoid it and the glass must be oversized unless you’ll have overflow. 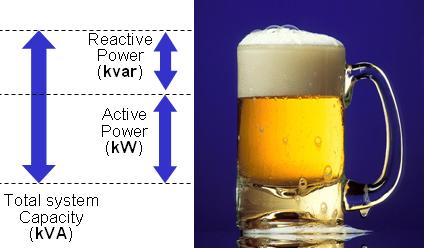 to be read with moderation…
Jacques Schonek