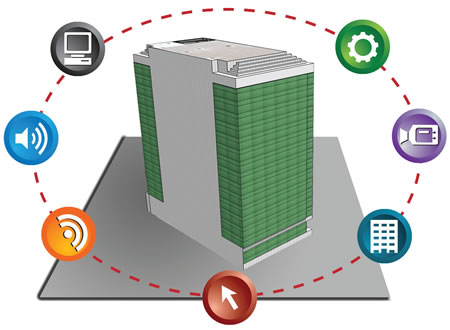 It seems that convergence of networks within Building is taking a decisive turning point. A strong trend that aligns on a single model the different functions of communication, technical management and security. Hence opportunities of interaction between devices. Electrical equipment are directly concerned.

Convergence concerns networks of communication, security ans technical management of Building. The principle is to regroup, according to common rules for applications, all networks on a single support and thereby rationalize the networks management. Points concerning the safety of persons remain however the most delicate and are often specific to national standards. But many other applications are largely concerned.

A certain evolution since 30 years

The evolution of technologies and usages materializes today a concept launched thirty years ago, but that could progress just step by step. Let us recall the major changes:

Modernization of equipment and software evolution has helped to unify the networks within Building. Because the challenge is there: optimize networks and open up functions made rigid by implemented technologies more or less specific and proprietary.

Main convergence factor, it allows you to assign to any device a specific address and to transmit data within the network. Widely used in the transmission of computer data on the Ethernet Network, this protocol has been then deployed in telephone transmissions (IPBX). But the great innovation concerned primarily building management tools, passing from proprietary protocols to IP protocols on twisted-pair cabling. It is the case with the KNX-IP protocol that unifies GTC protocol (centralized technical management) and data networks.

With the arrival of the IPv6 standard (replacing the now too limited IPv4), the number of available IP address on a global scale can cover widely the needs for decades to come

In a quarter century, with its single RJ45 connector, structured cabling has increased capacity by a factor of 1000, or speed of a 10 Mbit / s to 10 Gbit / s! Beyond the speed, it is mainly the way the wiring is now deployed in the building (more modular, denser and preconfigured to serve as an interface with all IP devices), which encourages the interconnection of many types of equipment.

Applications requiring both data transfer and a low power supply have consistently grown. For nearly a decade, the standard Power over Ethernet can respond to this trend by using a single cable with one or several twisted pairs leads the power. Today 24 W at most, but tomorrow, up to 70 or even 100 W will be able to supply the active equipments with an RJ45 plug common to data transmission. Thus, in some cases, the electrical cable has no more reason to exist.

Familiar to users of wiring since the 80s, the “Baluns” (balanced / unbalanced) have greatly evolved and today allow converting at very high frequencies (now at over 2 GHz). The Balun can adapt to a different medium. It also makes the link between heterogeneous connectors: BNC/RJ45, Mini jack/RJ45 and serves primarily to transmit video and audio signals over twisted pairs.

The fact that all equipments are now detectable on a single support with a common administration ensures necessary interactions for the actual performance of the building. Convergence avoids (at least in theory) communication problems between functional systems. Centralization and convergence of building systems enable administration of electricity consumption related to, for example, access management and forecasting rooms occupancy.

One big advantage of the IP system resides in the remote control. The network management is performed from a single point of control, so it can easily be deported. One can imagine coordinating lighting, air conditioning or the computing of a building, wherever it is.