Reverse current is another security risk. In normal conditions, distribution from power source is passed by busbar system to the devices with interconnection with voltage regulators and control units. In case of malfunction there is possibility for reverse current to occur.

Let’s find out more about it thanks to this article that our member Mile kindly sent us.

When we have reverse current situation, something is wrong with DC generator. So, generator fails and cannot provide electrical power and starts consuming current instead of providing it. Obviously, when this situation happens, generator is becoming a load to electrical distribution.

This relay is used as part of voltage regulator and you can see it in the Picture 1. The reverse current relay is in most cases incorporated in three-unit regulator together with voltage regulator and current limiter. The purpose is to prevent current from battery and feeding the generator. The relay consists of two coils on one core and spring-controlled armature.

There are two coils: one for voltage which is in parallel with generator and another one for current in series with generator. Apparently, the voltage coil is energized when generator reaches operational voltage.

As you can see from the Picture 1, when generator starts, operating voltage is rising up, and first winding (voltage winding) will cause sufficient magnetism and then close the contacts of relay. So, in this situation we have turn on generator on aircraft busbar, and we also have battery charging because generator is connected to the battery too.

However, in malfunction situation, when output voltage of generator is below value of battery voltage, we have current discharging from battery. Obviously, reverse current situation occurs. Evidently, current now flows in opposite direction, and it is energizing the current winding, relay is switched off and we turn off the generator from electrical distribution.

Please see the reverse current flow on the Picture 1, drawn with dash line: 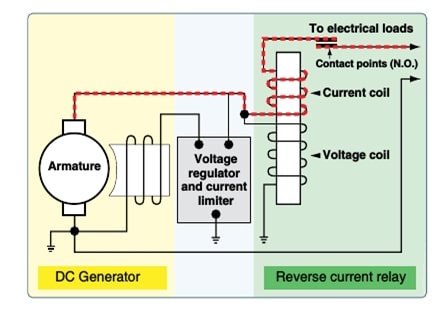 Another way of protection from reverse current is circuit breaker. Breakers can protect electrical current distribution against malfunction situation and operate with higher current values than current cut-off relays.

The purpose of reverse current circuit breakers is to ensure the safety of installation when fault occurs. 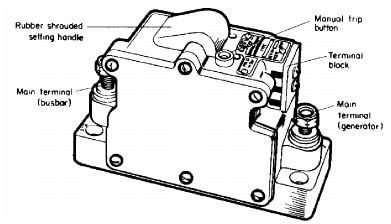 One circuit breaker is shown in the Picture 2. The principle is that it is magnetic device with direction control by coil connected between the generator and aircraft busbar.

There are two contacts, main which is connected to the voltage regulator and auxiliary which is connected to the generator in series. If you remember from my previous article, circuit breaker consists of latching mechanism and in case of reverse current we have induction in breaker and latching mechanism opens the contacts. Like other circuit breakers, we have visual indication and when failure ends we manually reset breaker. 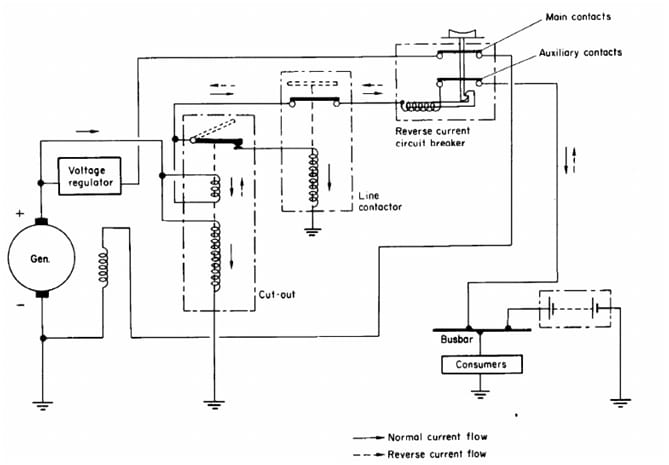 Picture 3. shows circuit with cut-out relay and circuit breaker, and this is generally a protection installed on aircraft for reverse current. If we compare Picture 1. with Picture 3 we can see that relay is now connected to line contactor and to the breaker via coil.

Under normal operational conditions relay is closed and reverse circuit current breaker is closed too. When malfunction occurs, and reverse current drops under the value of batteries, relay will open the contacts of line contactor and generator is turned off from electrical distribution.

On the other hand, if we have situation where line contactor isn’t open, for instance in case of arcing, electrical current will pass throughout a breaker. When current value overcomes set value of circuit breaker, the latching mechanism will open the main and auxiliary contact and turn off the generator for network.

So evidently with circuit breaker we have two levels of protection.

Reverse current can cause serious damage to DC generators. If we didn’t have protection it would cause damage in internal circuit and power supplies. Also, damage affects cable and connectors in power distribution.

Reverse current protection is matched together with voltage protection and they are implemented together, so dissipated power is linear. In order meaning to protect electrical distribution and generators we have cut-out relays and circuit breakers.

Thanks for reading this article. Did it help?