Hi, the following article has been written by a member of the Electrical Engineering community who want to contribute to the blog with this first article about electric generators.

Electric Generator is a machine that converts mechanical energy to electric energy. The mechanical energy can be supplied by the prime mover which combustion engine, steam engine, can water falling through turbine or even an electric motor or any such mechanism that can be a source of mechanical energy. Usually this energy is obtained from a rotating shaft that is also called the armature of the generator. The electric energy then produced can be used for power transmission to commercial, industrial or even domestic level. Generators supply current which usually has a frequency of 50 Hz, which is used here.

An electric generator has two parts:

The stator comprises of the stationary magnetic poles, whereas the rotating armature is included in the rotor.

Working of an Electric Generator

Generators usually work on Faraday’s law of Electro Magnetic induction. This law explains that by rotating an electric conductor in a magnetic field, an emf is induced, which creates a flow of charges. When the conductor rotates in the magnetic field, a voltage difference is created between its two ends and the flux in it changes and an emf is induced which is proportional to the rate of change of flux (e=-N dΦ/dt) and hence the current flows. The electric conductor rotating is called the armature of the generator.

This phenomenon is shown in the figure below: 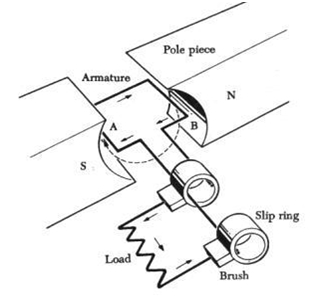 When the side of the conductor is perpendicular to the magnetic fields, the rate of change of flux is minimum in it.

There are five major types of electric generators, classified according to the manner in which their field flux is produced:

1) Separately Excited Generator: In a separately excited generator, the field flux is derived from a separate power source independent of the generator itself.

3) Series generator: In series Generator, the field flux is produced by connecting the field circuit in series with the armature of the generator.

4) Commutatively Compound Generator: In commutatively compounded generator, both a shunt and a series field are present and their efforts are additive.

The equivalent circuit of a separately excited generator is shown below:

Here the total voltage is represented by VT.

Its output characteristics are the graph of IL versus EA. 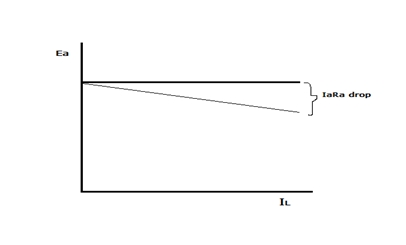 This graph is ideally a straight line but usually deviates due to the armature reaction. 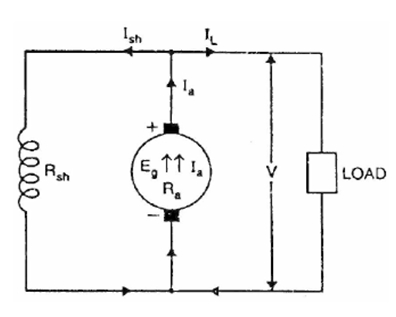 In the circuit, the armature current of the machine supplies both the field circuit and the load attached to the machine. The relation between the three currents is as follow:

The Kirchhoff’s voltage law equation for the armature circuit of this machine is:

This type of generator has a distinct advantage over the separated excited generator that no external power supply is required for the field circuit.

The Graph of its output characteristics is as follows: 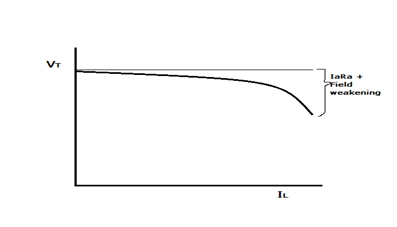 The series generator is the generator whose field is connected in series with its armature. Since its armature has a much higher current than the shunt field, the series field winding will only have a few turns but a thicker wire.

Its equivalent circuit is shown below: 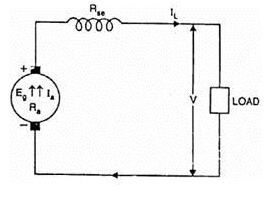 And its Kirchhoff’s law equation is written as:

The graph of its output characteristics is as shown: 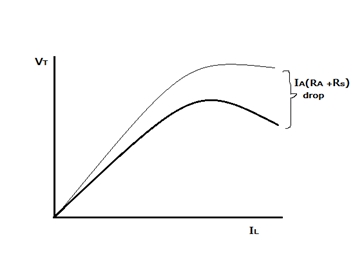 A commutatively compounded generator is one in which there are both series and shunt fields, connected so that the magneto motive forces from the two fields are such that they add up.

It can also be further divided into two categories:

The equivalent circuit for these types of generators is shown below:

The equations for a commutatively compound generator are:

The graph of the terminal characteristics of a commutatively compound Generator is as follow: 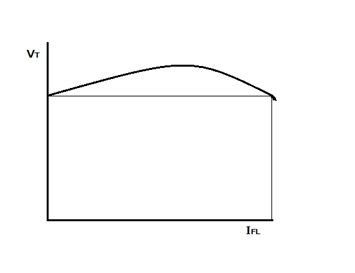 Its terminal voltage versus load current graph is as shown: 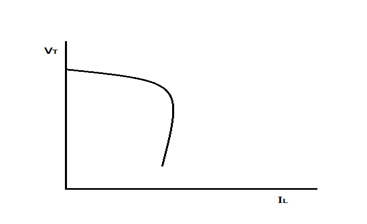