New series of tutorials by our devoted member Nasir. This time he’s going to focus on Circuit breakers. Here’s the 1st part: “What is a Circuit Breaker?”.

A circuit breaker is an electronic device which is used for the safe and reliable operation of the circuit. Its basic operating principle is that it keeps track of the flow of current in the path of the circuits it is installed, and when the value of the passing current exceeds the required value, it instantly breaks the contact and prevents the external wiring and circuitry from damaging due to excessive current.

This thing is important as now-a-days the equipment used and the circuitry designed are such that they utilize a very large amount of current which adds an increasing factor to the sensitivity of the circuit, thus placing the equipment and electrical components at a risk.

Any value larger than the limiting value of current can be disastrous and can produce extremely dangerous effects. This thing ultimately produces a risk for the expensive equipment which are being operated through that circuitry, or the expensive electrical components which lie further ahead in the circuit and can be damaged by the excessive current passing through the circuit.

Moreover even if cost is manageable and is not of much concern, still the damaging of these things can cause an unmanageable reinstallation of the circuitry which is obviously not preferable. 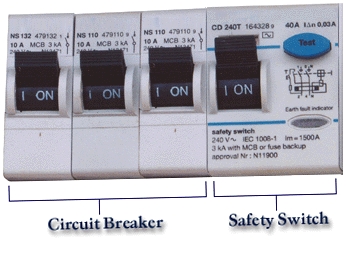 Keeping these and many other such problems and foreseen occurring situations in mind, a circuit breaker is chosen to be the best option to use as a safety device in your electrical circuits of daily use.

A circuit breaker also consists of an electrically energized coil, to which one of its two contacts is attached.

When the current exceeds the required value, the coil gets energized and the contact breaks hence the circuit is opened at that point so that no further current can flow.

When the safe value of the current is restored, the coil is automatically de energized and the contact is then maintained again to allow the safe passage of current. 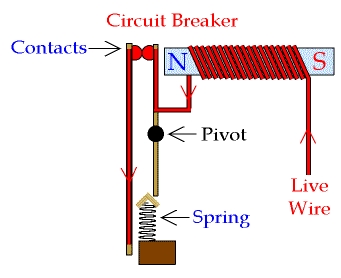 Another importance of an automatic circuit breaker is that no attaching and reattaching of the contacts is required manually, due to which no human monitoring of efforts is required time and again, and the circuit can operate in the safest manner on its own.

The advantages are not only limited to this step, but also it automatically retains its connections and the circuit starts to operate again.

Another advantage is that it does not need any replacement unlike a fuse or any other safety device. It can be reused as normally as before, since its operating principle is very wisely designed and it proves to be one of the safest devices for the safe and reliable operation of the circuit.

It is also not very costly, so is one of the very useful devices which are excessively used now-a-days.

So in our next tutorial we will be discussing the operation of these circuit breakers in detail, so that you can now more about them and their advantages, which prove to be very helpful in connecting circuits. So stay tuned.