Hi everyone, it’s Steven Mill. I’m sending you all my best wishes for this year and hope you’ll keep enjoying and sharing contents in the Electrical Engineering Community blog because I’ll sure do :)

For my first article of 2017, I wanted to deal with UPS VS Generators. So, does it push the generators out of scene?

Modern life is very dependent on electricity and Interrupting the Mains is like a nightmare and very unpleasant. However, it is possible to happen any time, even for a short period. Providing emergency power or stand-by system was always a concern for the engineers.

We learned from our childhood that the best substitution was always an Automatic AC Generator that works as stand-by. Especially when you want to solve this problem for a sensitive place like hospital, security system, public services and…

In the recent years, UPS (Uninterrupted Power Supply) has tried to replace the position of Generators and sit in their place. But it was not as successful as it was expected. Not only the UPS didn’t replace the generator in many cases, but also they both work peacefully beside each other and complete the stand-by system. So, in many cases the budget for providing emergency power is at least double.

As far as the computers are used daily more and more, the mentioned problems are more unpleasant.

UPS gets his position

The evolution in the Power Electronics brought UPS to the market as an alternative for generators and they are very common these days. They solve many of the mentioned problems and they are an appropriate solution for emergency power. They don’t have noise and they change the power form main to standby power in a fraction of second that most people don’t feel and there is no more fluctuation in Voltage and PF.

Instead, they perform high quality, stable voltage with perfect PF. Right now, many operations are done daily in hospitals without any interruption in power. 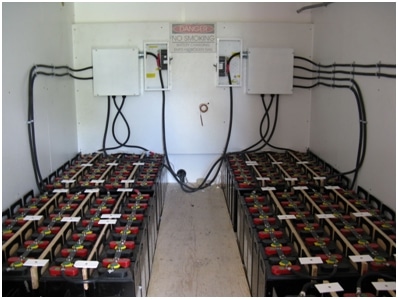 The biggest problem is the period of interruption in Mains. When this period is short, it is not a problem. UPS is normally designed for 1-2 hours power interruption.

Some places developed these devices to have it for longer period. They use battery banks for maximum one day power cut-off. The longer period for UPS means bigger batteries and more space, and certainly more costs.

Although it happens rarely, no one can guarantee that the power outage is less than a day. Hospitals, security systems, companies and many public services don’t accept this risk and they ask for 100% secured power. Therefore, you find the generator rooms very dusty and forgotten; the generators may work once in a year, but they are not eliminated from stand-by system.

Practically, the UPS couldn’t phase out the generator and they are still in use and alive. They actually appeased with each other. In many private and public places, you could find a combination of Generator and UPS for stand-by power system. The schematics are as below:

There are some important factors that should be mentioned. They affect this issue significantly:

The demand and importance of emergency power in the systems is more than ever, all the computer and data system and internet network need uninterrupted power. The devices in a place that require emergency power are more than you expect, but reasonably the demand of power in quantity (Kw) is less than before.

As a result, providing emergency power for the places is more expensive, complicated and sensitive than before. They have to install and use UPS for their sensitive electronic devices and vital data systems and they also need an AC generators for long-period main cut off. In the most sensitive places, the generators and UPS did not substitute each other and the people pay double, triple or more for emergency power in comparison with 20 years ago.

The future will shows, could this happen that we don’t need any generators. Some of the engineers believe, it seems to be impossible. Some others believe that we are in an intermediate era. Step by steps, you will see that generators will become antique devices and you only find them in museums and stores.

Thank you for reading.

What’s your opinion on this subject? Does the UPS push the generators out of scene? Comment below!