In this article, your fellow electrical engineer Mile is observing the transient process, during the switch of electric arc furnace capacitor batteries.

In most of the cases, the batteries have some inductive character, besides capacitive, and because of that fact they act as higher harmonics filter.

But in today’s article the case is different. Read Mile’s nice explanations below and don’t forget to comment afterwards…

In this case, we have only one system of batteries, and we make tests and analysis of the voltages and currents during switching of the equipment. We are making these tests, so we can determine the correct specs of the needed equipment that has to be installed, and to determine the parameters of the protective equipment.

Appearance of capacitors in the network causes some specific working regimes. The most important regime is the current at the start of the capacitor. This current can achieve greater value of more than 10 times of the nominal value.

The power factor of the system is 0,7. In the system there are batteries with 40 MVAr installed power. The batteries are in two groups and combined with inductive components, so they can actually serve as harmonic filters. 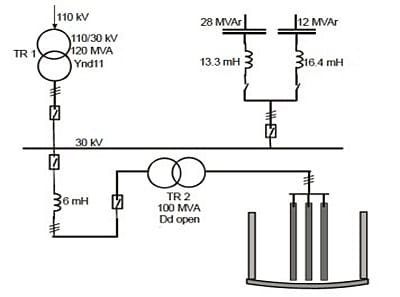 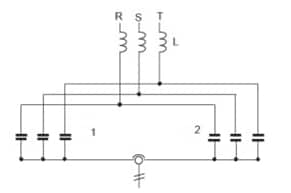 Batteries are connected in two groups accompanied by inductive components, so we can compensate the enormous reactive power and filter the third and fourth harmonic.

Table 1. Calculated values of the parameters

In the following section we will present the currents in the system during turning on the system.

Picture 5. Current flow for the third harmonic for the first 25ms

In order to determine the maximum peak of the current, we need to analyze picture 5, from which we can see that the peak is 2961 A and it is in the 0.0153 second.

Picture 7. Current flow for the fourth harmonic for the first 25ms

To determine the maximum peak of the current, we need to analyze picture 7, from which we can see that the peak is 1581 A and it is in the 0.0140 second. 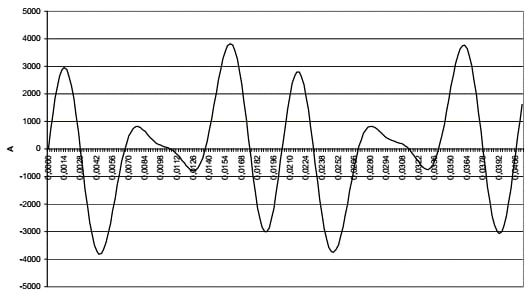 We will need the total current (sum of the two currents) because that is the main parameter for sizing the switch. The total current is 3812 A, and from the diagram on picture 8 we can see that the system has that value in the 0.0044s.

In the following section we will present the voltages in the system during turning on the system.

It is important to notice that the oscillations are result of the frequency of the system. Their disappearing is actually exponential function of the ratio of R and 2L. As we have stated before, all of these conditions are the worst cases. For all other cases, the results for the current and the voltage will be much better.

What do you think about this article? Do you have something to say about this particular process?