In our community we are lucky to have senior engineers who nicely accept to send us articles about technical topics or their career story. Last day, Muhammad (20 years experience) did and we were surprised by the title of his article…

It strongly raised our interest and we’re sure it will raise yours too! So what is the Thevenin’s equivalent to humans? Let’s Muhammad give us the answer right now:

Of course, my dear readers, you have studied, and even used, what is commonly (and incorrectly?) known as the Thevenin’s Theorem. One cannot become an electrical engineer, or even pass a Circuit Analysis course without having studied it. It is such a simple concept, and so beautiful that I cannot help writing about it knowing very well that a lot has already been written on it by people much more learned.

The theorem was originally stated for purely resistive circuits as per need of that time (in the nineteenth century). In simple words it says that a complicated electrical circuit (or part of it) behind a pair of terminals (or port) can be replaced by an equivalent circuit consisting of only a resistor in series with a voltage source. 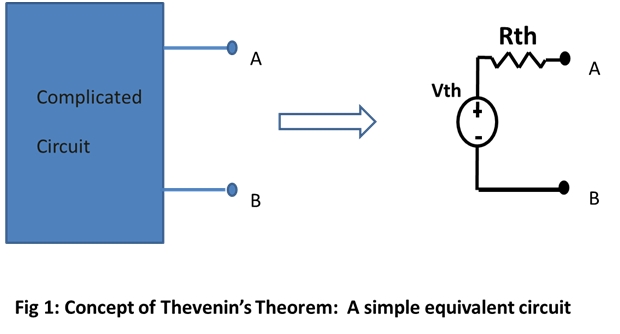 Application of the theorem was easily extended to reactive and complex circuits when the need arose. Instead of the word ‘resistance’ we simply insert ‘impedance’, and the theorem becomes applicable to all AC circuits without losing any accuracy.

I want to remind you that the theorem can be applied to a part of a circuit, a complete circuit, or a system consisting of many interconnected circuits. Now that is the key to my submission of today: extension unlimited.

I believe that the theorem can be applied, to a greater or lesser extent, not only to electrical systems, but also to any systems- small or large, chemical or mechanical, cyber or biological, human or animal, an individual or a nation! To grasp the idea fully, imagine that the theorem deals with systems having sources, impediments, and flow (or output).

In the case of electrical circuits, these three are: voltage/current sources, impedances, and current/voltage, respectively. In the case of mechanical systems these could be, respectively, sources of torque/force, masses (having inertia-rotational or translational), and acceleration. Compare the Ohm’s law equation: V=Z I with the mechanical equation: F=m a.

Similar analogs can be found in other types of systems. We can further generalize the three variables as:
{Set of stimuli, set of impediments, and output}.

We could also list them as:
{set of causes, set of impediments, and the effect}.

The effect is on the world outside the pair of terminals (port) in question; the causes and impediments are internal.

Do Humans Have a Thevenin’s Equivalent?

Think of two of your close friends. Both friends profess great loyalty to you. “I will give my life for you!” That claim corresponds to the open circuit or no-load voltage of an electric circuit (a voltage offered by it when the load is not actually drawing any current from it). Both friends show an equally high open circuit voltage. So their Thevenin’s equivalent voltages, Vth, are equal and high. 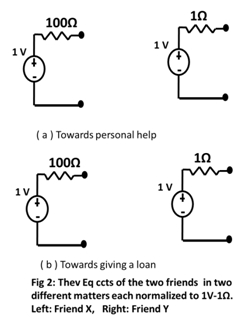 How about an analog of the equivalent resistance? That will be tested by measuring current with load applied, or with a short circuit. Send each friend an emergency SMS message midnight Saturday to come immediately and pick you up from the bus station. The response will decide the equivalent resistance. Suppose friend X calls back to say, “Can you find a taxi? I am in the gym.” Friend Y says, “I’m on my way. Wait for me!” – Who has given more output?
Obviously, friend Y has given more output than Friend X to the same load demand. Since the equivalent voltages are the same, friend Y has shown a lower resistance. If we were to show the equivalent circuits normalized to 1V and 1Ω, the diagrams would be something like the upper half of the figure 2. Now these are the equivalent circuits of one aspect of these two people.

Lower half of Fig 2 shows normalized equivalents of the same friends in the matter of giving you a loan.

Thevenin’s Resistance of your Boss

The above two examples imply the multiple aspects of human personality. Thevenin’s equivalent of a given person will be different for each different aspect of human dealing.

Before proceeding further with the discussion this may be a suitable time for you to practice by drawing up Thevenin’s equivalent circuits of your spouse in various matters.

Since there may be some confidential matters, I will make no attempt to check your answers. And of course, if it is unfavorable, you are advised to do dispose your work off immediately in a manner that it does not ever catch her eye.

Thevenin’s equivalent of the same circuit is different at its different ports or pairs of terminals. This is a point which some students in my classes would often miss. It would take me quite some time to convince them of this difference. That was until I brought in the example of a donkey. Mention of the donkey, a rather respectable personality in our region of the world, had multiple advantages. Any tendencies to doze off, or towards mischief at the back of the class, would disappear, and I would have the undivided attention of all students.

The point I want to stress is that a donkey will offer you one equivalent when you touch it at the front port, but very convincingly a different equivalent when you do the same at its rear port. All those who doubt my statement are challenged to verify it practically with a live donkey and share the results (even if from the hospital bed).

It is very important for the younger readers to understand these special notes about the Thevenin’s theorem. Later, an essay about maximum impedance matching will be based on this.

This impedance matching is also applicable to human dealings, especially with your boss, and of course, your life partner. It is a lack of comprehension of the maximum power transfer theorem which leads to a high divorce rate in the West.

Thank you for reading,
Muhammad A.

Brillant! (and funny). If y’all always found courses about this theorem boring, we’re nearly sure this article helped you to see it differently. What do you think of Muhammad’s article?