Last time, one of the member of the community named Nasir told us about “Magnetic Circuit Breakers”. Today, he continues his tutorial series by telling us about another type of Circuit Breakers.

Remember you can send us articles of testimonies too by sending a mail to the team!

Thermal magnetic circuit breakers are just an advance form of the Magnetic Circuit Breakers we have studied before. The difference lays in the fact that Magnetic circuit breakers have a single mechanism which operates on a solenoid or an electromagnet, and the circuit trips when the magnetic field of the magnet becomes strong enough due to excessive current flowing in the circuit.

So first studying the basic principle of operation of a thermal magnetic circuit breakers which is that when excessive current flows through the circuit the heat sensing elements attached to the trip unit heat up and opens the contacts so that the flow of current is stopped immediately, preventing the circuit from damaging.

A thermal magnetic circuit breaker is shown in the figure below: 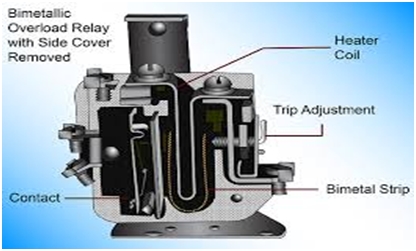 A thermal magnetic circuit breaker has two tripping mechanisms, on which the unit operates. These are:

In this case, a bimetallic switch is attached to the trip unit of the circuit breaker. It acts as a heat sensor.

In case of some faulty wiring or another problem when an abnormally large amount of current tries to flow through the circuit, it first passes through the bimetal switch attached to the trip unit, as it is also a path of the circuit through which the current has to flow.

When the safe amount of current is restored, the switch cools down instantaneously and the contact of the trip unit with the circuit ahead is restored allowing the current to flow safely.

In case of an electromagnet, a wire is wound on an iron core, thus forming an Electromagnet When a large amount of current tries to flow through the circuit the electromagnet starts generating a very strong magnetic field, whose value is directly proportional to the amount of the current.

This strong magnetic field has enough strength to attract the nearby armature, which then tries to move towards the electromagnet, touching the trip unit on its way.

When the trip unit comes in contact with the armature, it rotates in the same way as above, and hence its contact opens with the external circuit. When the value of current reduces and comes back to the safe value, the magnetic field also decreases and the original contact is maintained.

This mechanism is shown in the figure below: 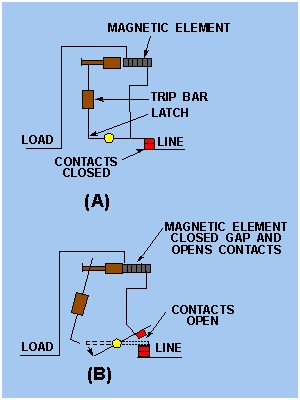 Thermal magnetic circuit breakers are used for fast switching, like in places where the current has to be limited very quickly. Their switching operation is so fast that the circuit is opened or closed in just a matter of milliseconds.

This was all about the working mechanism of Thermal Magnetic Circuit Breakers. Up till now almost all the main types of the breakers have been discussed, which are commonly used now a days. So in the next we will discuss about disconnection the circuit breakers.