New article by Carlos who sometimes sends us his essays. If you too want to be published in the blog, do not hesitate to send us a mail.

Several industries and utilities have experienced circuit breakers tripping due to undesirable relay operations, producing blackouts and a decrease in their expected incomes. This situation has raised a lot of concern in managers, grid operators, and reliability and protection engineers who have carried out root cause analysis to determine the origin of the missoperation of the protection systems.

Some results have led to conclude that the real cause is a phenomenum called sympathetic tripping, following inrush currents, unbalanced or high load conditions.

In this article, it is discussed the sympathetic tripping phenomenun produced during the energization of parallel transformer and out-of-section faults in distribution systems.

Sympathetic tripping of power transformers, connected in parrallel, tipically ocures when they are fed by a weak source (low short circuit level and high value of source impedance).

In order to explain this, a power system comprising a Thevenin Equivalent of the Grid, a 115 kV-Bus, two power transformers 115/13.8 kV connected in parallel and a 13.8 kV-Bus is shown in the following figure. 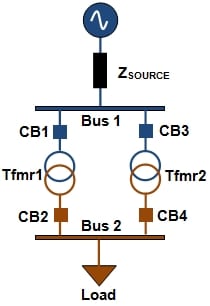 The load is supplied by transfomer Tfmr1 (circuit breakers CB1 and CB2 are closed) while transformer Tfmr2 is previously denergized (circuit breakers CB3 and CB4 are opened). When CB3 is switched on, high inrush currents flows from the source to Tfmr2 to magnetize its core.
Due to the high source impedance, an abrupt voltage drop is produced on ZSOURCE, and the low voltage on Bus1 tends to demagnetize Tfmr1.

In approximately 100 ms the insrush current on transfomer Tfmr2 decays and the voltage at Bus1 begins to recover, producing a slow magnetizing process of transfomer Tfmr1 that might lead to the operation of the differential protection scheme (87T), tripping CB1 and CB2 and disconecting the load (Sympathetic Tripping).

Radial feeder trippings during an out-of-section fault are also related to the phenomenom of sympathetic tripping. A faulted circuit in a medium voltage distribution system is shown in figure 2.

As it can be seen, the short circuit current flows from the source to node “a”, and as a consequence, the voltage at the substation drops proportionally to the source impedance and the fault current magnitude.

At first instance, it is possible to think that the fault must be cleared by CB1, without affecting the circuit protected by CB2. However, if there are several low-inertia induction motors included in ZLoad 2, an overcurrent might flow through CB2 due to stalling conditions of some motors, produced by the voltage sag.

Depending on the sensibility of the overcurrent relay at CB2 and the time to open the circuit by the protection system associated to CB1, a pick up and a subsequent sympathetic tripping by CB2 might occure.

The phenomenon of sympathetic triping can be consider as a missoperation of a protective device, where a healthy section or element of a power system is isolated when a fault occures in another section of the system or during the energization of parallel transformers connected to a weak source.

The main reason of occurrence of this undesired operation of the protection system is the presence of an undervoltage conditon originated by an overcurrent during out-of-section faults of inrush currents.

What’s your opinion on this article? Tell us if it helped in the comments area.