Superconducting elements are the most important part of electromechanical systems because of their functioning and these systems form the superconducting electric machines. Lack of DC resistance in super conductors contributes much to its greater efficiency. 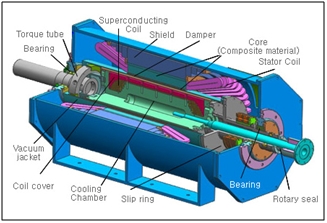 Superconducting AC synchronous electric machines which include alternators and synchronous motors have become more common nowadays than before.

The rotor or the rotating member of the machines has an electromagnetic field winding on itself for direct current which employs superconductors.

The stationary member or stator of the machines however utilizes the same old conductors constituting of copper conductors which undergo normal conduction.

An attempt to reduce the resistive loss of the stator conductors they are cooled but the loss is not permanently removed.

The working principle previously used in old electric generators which included synchronous permanent magnet generators or motors and the induction machines is also being used nowadays in the superconducting generators.

The only difference between the two is the windings of the superconducting generator. These windings are able to support a more powerful magnetic field as compared to that of conventional generators. Using this coil in other various rotating machines will also improve their efficiency; make them more compact and eco-friendly.

The superconducting generators have a coil cover for the coil to support it when under centrifugal force and a damper for protection against high frequency magnetic field. A cooling chamber to maintain ultra-low temperature is also present along with a rotary seal which is a rotary room to provide the cryogenic coolant from.

The core is made of non-magnetic stator core plus a stator coil made of copper. The current is applied to the super conducting coil, made of superconducting material, through the slip ring.

Three insulations are also present, first is the shield to protect the release of magnetic field to the surrounding, second is the vacuum jacket which forms the vacuum insulation layer and last is the torque tube which is the insulating structure.

Superconductivity technology is not without benefits and its scope and ability is now much understood.

The magnetic resonance imaging techs in medicine and super-colliders or particle physics analysis done in research are a few beneficial outcomes of this technology which clearly are upgrading different areas of our society.

The size, cost and efficiency of the production and usage of electricity will also be greatly affected by super conductors.

Cost comparison is done between the generators working on super conducting technology and those working on conventional tech and is shown in the “Superconducting Generator Cost Comparison” chart.

The results obtained from the comparison show that the conventional technology costs cheaper when dealing with low power levels. This is so because the cost of copper cable used in the conventional machines is much less than that of the superconducting cable.

The cost of superconducting generators also increases because of the use of cryogenics to cool the machine up to a specific temperature while the cooling cost of old generators is much less. 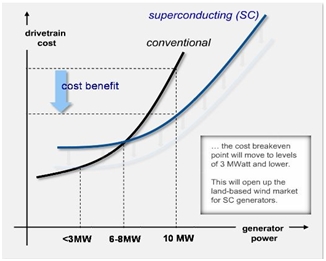 The case is reverse when talking about high power levels. Super conductors become more cost effective at this point because the power per unit of increase becomes more favorable. The break-even point for both generators comes out to be between the ranges of 4-6 MWatt.

It is expected in future that further research and improvement in superconductor production tech and the cooling method through cryogenics will decrease the cost a great deal.

If it decreases up to 2 MWatt, competition for superconducting generators will also decrease.

First a few of its positive points as compared to conventional tech are being highlighted.

Some negative points of this machine are as follows:

The coils used in the superconducting generators or motors have electric resistance to a zero unlike that of the copper coil used in old generators leading to less loss of electrical resistance and so greater efficiency.

As the electrical resistance loss is decreased so the heat produced by the machine is also less. This reduces the size and the quantity of the material used for production. Advanced heat and electric insulation along with cryogenic refrigeration technology is required by the superconducting generators plus motors to maintain the low temperature requirement and the functionality of the superconducting coil.

Leading future market is expected from superconducting generators and motors because of its characteristic high energy efficiency and better resource utilization ability.

It has much resemblance to today’s demand of high efficiency and eco-friendly plant.