After a focus on the different types of thyristors, one of our member decided to share information about single and bi-directional thyristors. Hope you’ll enjoy his sharing.

One directional thyristor, also known as Silicon Controller Rectifier (SCR), is actually nothing more than a simple four layered current controlling device that allows passing current only in one direction. It has three junctions and three terminals. The device operates if current passes through the gate of the thyristor that is connected to the p-type material nearest to cathode.

Bi-directional thyristor, TRIAC or triode for alternating current all is the names of a same device that conducts current only two directions. Either positive or negative current can enable flow and active its gate electrode. Once the device is triggered, it then stop conducting if the current value falls from a threshold value known as Holding Current.

SCR works in 3 modes depending upon its biasing:

TRIACS have two terminals M1 and M2 and its working is explained by triggering it in each of the four quadrants. In the first and second quadrants, current flows from M2 to M1 while in the third and fourth quadrants the current flows from M1 to M2. Though the sensitivity depends upon the physical structure of bi-directional thyristor but usually quadrant 1 is most sensitive because the minimum gate current required for this and quadrant 4 is considered as the least sensitive.

To improve the commutation characteristics, only the first three quadrants are used. Bi-directional thyristors are actually two anti-parallel thyristors integrated on a same silicon chip with a central metallization gate. Each half performs its specific function corresponding to its dynamic and static properties. For each current direction mechanical components like insulators, clamps and heat sinks have to be used. 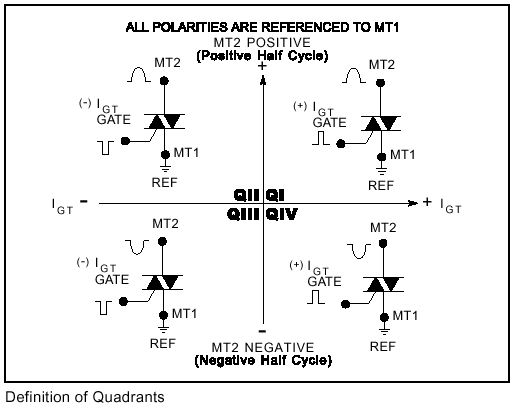 SCR are used in the systems where high power coupled with high voltage is required and in medium to high voltage power supplies such as regulators, welding machines, lamps, in small and major appliances of house etc.

Did your learn some things thanks to this article? We hope so!