New article of our member Nasir about these 2 type of configuration. Feel free to leave a comment.

Thyristors are four layered devices, having a PN-PN structure. Like transistors, thyristors are used as switches and they are considered as ideal switches.

There are some standard available ratings of thyristors. It is not necessary that we will require only those standard rated thyristors. Maybe the need of the hour demands some other value components providing different voltage and current ratings which are not available?

For this purpose, we connect the thyristors in series or parallel configuration. Both of the configurations along with their operation style will be discussed in this article.

As we know series configuration increases the voltage ratings while the current ratings remain the same. Thyristors of same type do not have same I-V and off state characteristics. 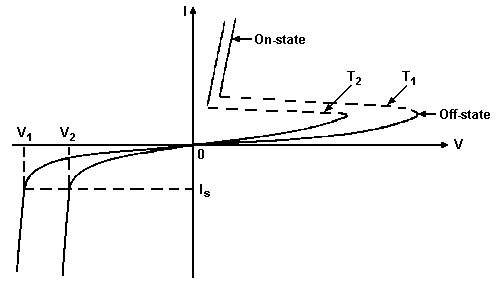 So the voltage drop across the thyristors would be unequal. To solve this issue following parameters are set by default.

Now, the off state currents would be as shown in the figure: 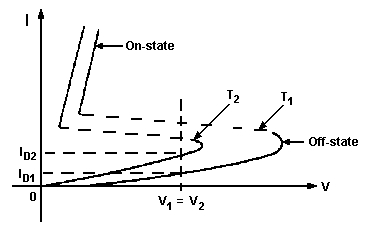 High and steep trigger pulses must be used in order to make the firing of thyristors simultaneously.

If the load current increases from the current rating of a single thyristor, then the parallel configuration is used. The same problem arises here as well. Current is not shared equally among the thyristors as the V-I characteristics are not similar. 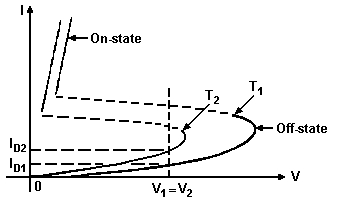 Power is dissipated by the thyristors which carry high current. This power dissipation causes the junction temperature to increases, decreasing the internal resistance. This can damage the thyristor which is termed as thermal runaway. Thermal runaway can be avoided by following these steps:

Resistors are used in case of static current sharing. When resistances are used in series, the losses may become high.

Following are some major and most common applications of thyristors. Both parallel and series configuration can be used, depending on the nature of application.

These were the basics of thyristors when connected in series or parallel configuration. We came to now the variance in their current and voltage properties as well as how we can get the best desired output by the combination of different configurations.

In the next article we will be discussing some major types of thyristors and their uses.

What are your impressions on this article?