Here’s the next article of the tutorial on Semiconductor Power switching devices. You can also write an article and send it to us by mail.

Both of the connection patterns are widely used and will be discussed in this article in detail along with diagrams.

Series connection means a side by side connection. When two components are connected in series, they have one common junction. The variation of voltage and current in a series connection is as follows:

The same properties also hold true for diodes when they are connected in a series configuration.

When connected in series, we observe the following properties to hold true among the diodes:

This problem can be solved by connected resistances across every diode. Voltage would be shared equally; hence the leakage current would differ.

Total leakage current would now be:

A single diode cannot meet higher voltage requirements, unless it is connected in series. So the major areas of application are:

Consider two diodes connected in parallel configuration. Current would be shared among the two diodes. To make this sharing equal, inductors (with same inductances) are connected. When current at D1 increases, the voltage drop across L1 increases, generating an opposite polarity value at L2. 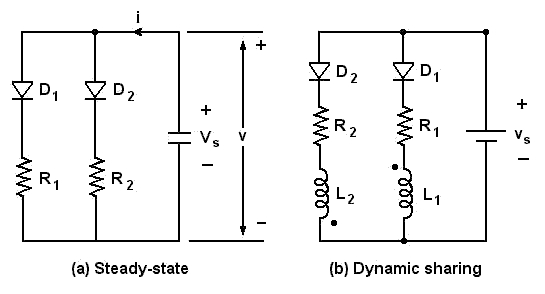 Diodes of same type having same voltage drops can be used for steady state conditions. In this case, the parallel diodes would have the same reverse blocking voltages. Some precautions are to be kept in mind while using the diodes with same forward voltage drops, which are:

Negligence would change the temperature of the diodes unequally. This will in turn cause the forward characteristics to differ which can create problems.

Finally, which configuration is to be used? Well, this depends on the voltage and current ratings of the application, as I have discussed earlier. Both the configurations can fulfill our requirements which a single diode cannot.